Two From Guy and Hemingway

Barry Guy and Gerry Hemingway play together on two piano trio recordings. They’ve only recorded together once before, over two decades ago, on Cascades with Marilyn Crispell. Beyond being another piano trio (with someone whom both players have worked with extensively), Cascades anticipates a motif of light and color that’s present in these recordings with titles like “Violet Sparks In Soft Air” and “Shadow Play” as well as the abstract color play of Mary Vernon’s “View At Nice” on the cover. It’s a fitting motif, given that a boundless palette of timbre achieved through damping, preparation, and extended techniques characterizes each musician’s style. As always, they’re two fauves here. 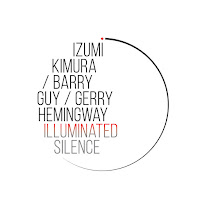 Following several self-released solo efforts and a duo with guitarist Tommy Halferty, Japan-born, Ireland-based pianist Izumi Kimura joins Guy and Hemingway for 8 tracks across 63 minutes. Guy supplies two compositions from his other piano trios, “Blue Horizon” (on Deep Memory with Crispell/Lytton and Blue Horizon) and “Ancients” (on A Moment’s Liberty with Fernández/López and Blue Horizon ), as well as a new composition in “Finding It.” Fernández’ “How To Go Into A Room You Are Already In” (on Some Other Place and Blue Horizon) is also used and the rest is presumably free playing. The title ties in to an excerpt of Sekitō Kisen’s “Sandokai,” which Guy reads at the beginning of “Improvisation on Light and Shadow:”


In the light there is darkness,
but don’t take it as darkness;
In the dark there is light,
but don’t see it as light.
Light and dark oppose one another
like front and back foot in walking.

The relationship between light and darkness, color and lack of color, sound and silence is the same - art and music require both. As the title indicates, this particular recording leans towards silence. It is by no means a quiet record, but Kimura is generous in the space she gives Guy and Hemingway on the slower-paced “Improvisation on Light and Shadow” and “Improvisation on a Painting” (again, fitting) and it’s here where their timbral explorations shine. When the pace quickens and the density increases, Kimura is adept at enhancing the emotive, cinematic qualities of Guy’s compositions, and the versions of “Blue Horizon” and “Ancients” here are arguably the most stirring because of her playing. Guy comfortably weaves through his compositions and the improvisations with his standard barrage of timbral techniques, continuously communicating with both Kimura and Hemingway. Hemingway feels a bit restrained both in volume and timbre on this recording, though his hard-hitting solo on “The Willow Tree Cannot Be Broken By The Snow” and his breath on the drumhead in “Improvisation on Light and Shadow” and “How To Go Into A Room You Are Already In” are standout moments. The trio’s playing structurally meshes well, but Kimura’s sound is clean and crisp, free of extended technique and preparation, and usually tonal, in stark contrast to the much less limited approaches of Guy and Hemingway. It’s a record well worth listening to for the talented Kimura (whose improvisations are often so collected they seem composed), for the interaction of Guy and Hemingway, and for a necessary reference point of excellent performances of Guy’s compositions.

Illuminated Silence is available digitally and on CD. 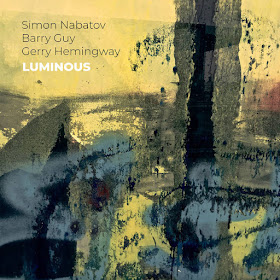 On Luminous, Köln-based pianist Simon Nabatov joins Guy and Hemingway for improvisations lasting 12 tracks across 70 minutes. This is the first time Nabatov has recorded with Guy, but he’s recorded with Hemingway on Live At The Bimhuis 21-9-12 with Oğuz Büyükberber (who provides the colorful cover art for Luminous) and on this years Readings - Red Cavalry and Readings - Gileya Revisited.

Indicated by the title, this recording is more high-volume, high-density than Illuminated Silence. Guy’s playing is more physical and Hemingway is more energetic here, with two awesome hard-hitting solos on “Vacant Prophecy” and “Unfrozen Sorrow.” Nabatov utilizes the full register of the keyboard - usually simultaneously - with a variety of approaches to time, density, and volume, often expertly accenting the rhythm section’s interplay with a percussive motif like the single hammered note on “Basket Glide.” When Hemingway joins Nabatov with a marimba (on “Basket Glide,” Shards Examined,” “Luminous,” and “Soothing Mirage”), magic happens, with each player dialing in to the intricacies of the other’s playing and crossing paths in such a way that you might mistake the marimba for piano, and vice versa, for just a moment. Especially on “Soothing Mirage,” which also sees Guy’s muted plucks mimic a tik tok while Nabatov palms inside the piano to create a chiming clock. Nabatov’s varied, percussive, sometimes thunderous attack with some extended techniques compliment Guy and Hemingway’s approach well, but several of the tracks tend to fall into a quiet-loud-quiet or continuous climactic crescendo structure and, somewhat paradoxically, though it’s an energetic performance there’s an urgency that feels lost in the recording. Like Illuminated Silence, it’s well worth listening to as a document of Guy and Hemingway’s colorful interplay and Nabatov’s raw talent as well as that amazing communication between marimba and piano.
Luminous is available digitally and on CD.