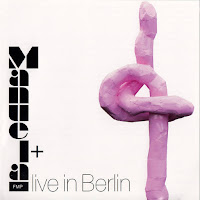 
This gem was made available earlier this year by our fine friends at Destination: OUT, who have been doing humanity a great service by keeping some of the essentials from the FMP vault available to the masses digitally via their Bandcamp page. According to Felix Klopotek’s terrific liner notes (which are available for perusal on Discogs if you can’t obtain a copy elsewhere), Manuela was built off of the working relationship between Reichel and Carl and as a reaction to the since thoroughly debated topic, ‘Has non-idiomatic music become an idiom itself?' The duo, who were sharing a flat in Wuppertal, released "Buben" on FMP in 1978, an album on which they returned to their first instruments, Reichel to violin and Carl to the concertina, in order to escape any deterministic confines subliminally established by their then-current areas of virtuosity (guitar and saxophone, respectfully).

Both musicians took a great deal from the experiment (Carl eventually abandoned the saxophone altogether for the clarinet and concertina) and later assembled the group Manuela with Carlos Zingaro on violin to continue the ideas and approaches of those sessions. Manuela’s trajectory can be traced back the Radio Jazz Group Stuttgart sessions from 1976-78 , where some of the first encounters between Reichel and Carl took place. Sometime after “Buben” was released in 78’ the pair formed the Bergisch-Brandenburgisches Quartett with like-minded artists Sven-Ake Johansson and Ernst-Ludwig Petrowsky. That group’s sound was a direct precursor to what Carl and Reichel would continue with Zingaro in Manuela and with Shelley Hirsch and Paul Loven in the September Band .

Manuela+ (the title a hat tip to the 1995 Carl/Reichel record “Buben…plus”) consists of the original trio plus the composer and prodigious komungo (also called the geomungo) player Jin Hi Kim, who had already collaborated with Reichel by the time of this recording (he appears on her 1993 album KomunGuitar). Her playing underpins the entire album, filling out the improvisations and giving them a complex pizzicato bite. As for the original members Carl plays clarinet, accordion, and the claviola (not the antique player piano), Zingaro adds his wriggling, microtonal violin runs and soft accents, and Reichel mainly plays daxophone (but also teases one of his custom guitars briefly). The album, recorded during the Total Music Meeting on November 6th, 1999, at Podewil in Berlin, was originally released by FMP in January of 2011, only months before Reichel’s untimely passing, both as a stand-alone CD and as a part of the “FMP Im Rückblick” boxed set. Aside from the track “Licking the Bullfrog” on the album “Total Music Meeting 2001: Audiology – 11 Groups Live in Berlin” which was recorded two years later and absent Jin Hi Kim, this is the only official output from the Manuela collective, which apart from the brilliant music herein makes it absolutely essential listening. The sound of these improvisations is as weird as it is scrumptious, with the real charm lying in the quartet’s attentive interplay and in the boundless complexities and subtleties they conjure from their meager assortment of instruments. This choice of devices also tinges the music with surreal folk underpinnings, but as played by the folk creatures themselves draped in the still dripping pelts of their minstrels. It’s earthy and warty and smells of boiled cabbage in all of the best possible ways.

The improvised portion of the album is styled “Ei! Improvisiererei…!” and is broken into 7 tracks, the subtitles of which are each a subset of the letters that together comprise the main. As you can imagine Carl and Zingaro make up much of the melodic content herein, Zingaro alternating drones with scraping multi-phonics and swells of whining vibrato alongside lightning fast runs that sound half-whispered, and Carl utilizing his three instruments to masterfully color the pieces in their knobby folk hues. The addition of Jin Hi Kim to the group gives the piece an unorthodox rhythm with the heavy plunk and wide vibrato of Korean Sinawi music (at times even Reichel’s daxophone recalls the reedy vocal quality of the piri) and I can’t overstate how well this works with the old-time European impressions of Carl and Zingaro. Reichel, true to form, is the wild card of the performance. His daxophone thumps, hisses, growls, speaks, grunts, and sings. One minute he’ll be coloring the background with rhythmic springboard-inflected patter, the next he’ll take a bow to his creation and unleash some grisly anthropomorphic sound that’ll make your hair stand on end. We even get a tasty bit of Reichelian guitar play towards the end of the fifth segment of the improvisation, his two handed tapping unleashing a torrent of melody and harmonics. The second piece, “Those Were the Days” is a cover of a song made popular by the Welsh folk singer Mary Hopkins whose version was produced by Paul McCartney and released on the Beatles’ own Apple Records in August of 1968.

This version of the song is in fact a remake of the popular Russian romantic piece "Дорогой длинною", or “ By the long road” which was composed by Boris Fomin with lyrics by the poet Konstantin Podrevsky (even though the song is sometimes credited to Gene Raskin who wrote the English lyrics for the Hopkins version). The Manuela+ rendition is an eccentrically colored reinterpretation of the folksong that dispenses with the bounce of the previous versions’ refrain but retains the languid melody of the stanza which is played gravely by Carl and Zingaro over the thump and croak of the komungo and daxophone. It’s a properly surreal conclusion to the album.

The cover art is a photograph of the 2009 sculpture by the Austrian artist and provocateur Franz West called “Eidos”, the word eidos being Greek for form or essence. West delighted in having his large absurdist sculptures installed in locations of refinement and prestige in an attempt to subvert the tyranny of civilized life. That considered I’d have trouble finding a better metaphor for Manuela. It was Louis Armstrong who said “All music is folk music” and with that in mind, “Live in Berlin” definitely dispenses a grisly representation of the form; its fleshy tentacles lashing out as shadows on the wall of Plato’s cave.

Buy it from Destination: OUT on Bandcamp: