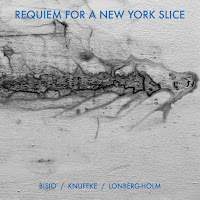 Michael Bisio (contrabass) gathers together Kirk Knuffke (cornet) and Fred Lonberg-Holm (cello) to mourn Mike Panico with five spontaneous compositions lasting an hour. Panico co-founded the NYC label Relative Pitch Records with fellow Stone volunteer Kevin Reilly in 2011 and created an expertly-curated catalog while simultaneously developing meaningful relationships with the musicians he produced. Bisio and Knuffke are two such musicians; they have recorded with Relative Pitch several times and recorded together on Accortet (with Michael Wimberly) and Row for William O for the label. This is Lonberg-Holm’s first recording with either Bisio or Knuffke, and he’s yet to record on Relative Pitch, but his distressed strings are a perfect compliment to Bisio and this setting. True to the title (which also references Panico’s passion for pizza), Requiem was recorded three days after Panico’s death on October 2, 2018 and the titles of its movements are the titles of musical texts for the Catholic requiem mass (“Introit et Kyrie,” “Sanctus,” “Pie Jesu,” “Agnus Dei,” and “In Paradisum”).

“Introit et Kyrie” has Lonberg-Holm bowing a discordant vamp brimming with overtones and sorrow - a sonic mourner rocking back and forth in discombobulation. Knuffke’s horn wails, and then is moved to ululating trills. Bisio’s arco acts as the glue between the two, alternately engaging them but sometimes detaching, sounding like a shipmast creaking and cracking in the squall. “Sanctus” continues this funereal feel with a slow tempo, Bisio’s bowing deeply resonating, each vibration exaggerated and outstretched, waves of heavy gravity, weaving with Lonberg-Holm’s dramatic playing. Bisio’s protean walking bassline full of bent notes falls to pieces, reassembles, and reconfigures across the sidelong “Pie Jesu,” simultaneously providing a communicative base for the other players and the sonic centerpoint of the piece. “Agnus Dei” begins with the players disconnected, responsive but delayed, and the relatively generous space sounds like the players taking swipes at the silence. And “In Paradisum” ends with an ascendant Bisio arco solo, transferring a great weight to his strings until he’s sawing, like a coffinmaker.

Dynamically, the focus is often on the strings. They take up the most space, volume, and movement at any given time. Lonberg-Holm’s timbrally-rich constant onslaught intertwines with the exploratory cadences, techniques, and timbres of Bisio to create a chemistry that belies their having never recorded together. Knuffke swings between extended techniques that compliment the strings well - wails, screaming trills, tinny mutes, and ghostly whistling - to more detached, reflective, impressionistic interjections. “Introit et Kyrie,” “Sanctum,” and “In Paradisum” contain the most emotive playing I’ve heard in a long time. Though the tone is more often requiem than easter, there’s celebration here too.

And there’s much to celebrate. Panico’s memory lives not just in the musicians and others he encountered but the label he helped create, which has already released an incredibly strong catalog this year and is still releasing recordings he produced. And of course in this excellent recording, which is a better service than anyone could ever hope for.

Requiem for a New York Slice is available digitally and on CD.