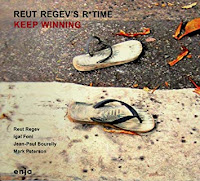 Add to that the versatility of Regev, who throughout her career defied any attempt to lock her in any genre or style. She has played in Anthony Braxton’s ensembles, collaborated with experimental guitarist Elliott Sharp and with the Radical Jewish Culture projects of trumpeter Frank London. Likewise, Bourelly has worked with Muhal Richard Abrams, Henry Thradgill and his own power trio Stone Raiders with Rolling Stones’ bassist Darryl Jones and Living Colour’s drummer Will Calhoun. This kind of inclusive approach is one of the strengths of R*Time.

But above all R*Time is about chemistry - chemistry between close musicians who love to play together and know what it means to struggle for their art through many bumpy roads, as the opening pieces suggests, and the natural chemistry between the myriad legacies of jazz, soul, funk and free jazz. And it’s about captivating charisma, humor and elegance as Regev and Bourelly demonstrate on the powerful, tragic-comic fantasy “The Last Show”, the ironic title-piece and “With A Smiling Face”.

Regev is not shy from being openly emotional on her “Up In The Sky”, dedicated to her late brother, or on the lullaby for her daughter “Hard to Let Go” . Foni’s rounds the rich aesthetics R*Time with his brief “No Justice No Peace”, dedicated to “all indigenous people in our world who suffer from oppression”, and his bluesy arrangement of Ornette Coleman’s “War Orphans”, both stress R*Time debt to the fiery, spiritual Afro-American free jazz of the sixties.