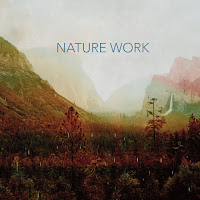 What's more a work of nature than Yosemite Valley? The iconic, and somewhat trampled, masterpiece is in a sense the heart and soul of the American National Park System. The pictures appears here on the cover of the group Nature Work's self titled album and while it is a beyond my knowledge wether they just liked the picture or they feel a kinship to the music, it is a nice indicator of the naturally flowing and sometimes majestic (that's nearly a collocation with the words Yosemite Valley) music within.

Nature Work is born from reed players Jason Stein and Greg Ward - two Chicagoans who have made a name for themselves as members of groups like Mike Reed's Flesh and Bone, as well as being composers and band leaders themselves. The two split composition efforts on this album and fill out the rest of the group by drawing from opposite  coasts: Los Angelean bassist Eric Revis and New Yorker/Berliner drummer Jim Black. The album that unfolds is a comfortably accessible set of tunes that fell nicely in my ears from the start, kind of like the first site of that herald valley ... you will be impressed.

The album begins with a hyper, melodic line traded, and then played in tandem, between Ward and Stein. Revis and Black strike a thick groove between the horn lines, and then below the woodwind solos. First is Ward's sax solo, long, winding, and melodic, then comes Stein's reedy bass clarinet, with an even more dynamic solo over the solid rhythmic work. Ward tosses in some brazen high register wails and the two come back to the spirited head. Overall, a rather straightforward and enjoyable fun tune.

The following "Hem the Jewels" begins with a solo bass introduction, leading into a syncopated head, and eventually to Stein's free ranging solo, and effortless runs through the of bass clarinet's four octave range. 'Opter Fopter' starts off in the range just about at the limit of human hearing. It then develops into a probing piece, that slowly gains in sonic density, and morphs into a modern jazz ballad with much motion provided in the suspenseful bass lines. 'South Hempstead' is a freely improvised track, with the oft dissonances and surprising convergences that come when a group is in tune with each other. Finally 'Rise' caps off the album with a tune that does exactly that, slowly building from near silence to a fierce climax about a minute from the final soothing note.

I suppose one could extend the metaphor of the Yosemite Valley if they wanted - something about free climbing El Capitan, the sympony of nature at work, or simply hoping a bear doesn't rip the door off your car trying to get to your cooler full of burgers - but it seems to be a bit beyond me to figure that one out. Plus there is no need, the music on Nature Work stands as excellent example of thoughtful composition and playful improvisation as you could want. It's easy to enjoy and difficult to forget.