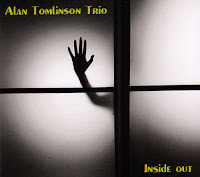 The great English trombonist Alan Tomlinson has been sharing his cheeky brand of free improvisation since at least the early 70's, playing alongside the likes of Peter Brötzmann, Barry Guy, Tony Oxley, Jon Corbett, David Toop, and many others. He's performed across Europe in this trio with Phillip Marks and Dave Tucker since 1992, but living in the cultural void that I live in, I wasn't aware of them until the release of their first album, 2017's "Out and Out" also on FMR which compiles live recordings from 2009-2016. Guitarist Dave Tucker spent the 70's involved in the Manchester punk scene before landing a gig with The Fall in the 80's, recording with the group on their album "Slates". He eventually transitioned to playing free music, in addition to producing music for television and dance, and has played with the likes of Evan Parker, Lol Coxhill, and Barre Phillips to name just a few. His excellent group 'Velocity of Sound' includes Parker, Steve Noble, and John Edwards. Drummer Philip Marks has impressed me greatly on both releases by the trio, providing some of the most tasteful and energetic free jazz percussion you're likely to hear. He's provided his talents to ensembles including members like Derek Bailey, John Butcher, Evan Parker, and John Edwards and has released several albums with his group Bark! (the exclamation point is part of their moniker, I promise I'm not shouting at you). Here the listener is treated to a handful of solid improvisations by the trio (with one in quartet with bassist John Edwards).

Throughout the set Tomlinson expresses in a rough cut honking tone that pairs well with Tucker's slicing no-wave guitar sound. Prickly swells of mutant goose chatter emanate from his horn along with the obligatory salival sounds of free jazz trombone. Tomlinson utilizes the instruments' full potential, his playing not subdued in the least; on the contrary it faces you head-on, teeth gnashed like a rabid street dog. Marks' style here is reserved yet highly active, providing an excellent foil for the guitar and trombone. Almost every bit of background space is covered in the patter of skins and the splash of cymbals. Tucker's guitar playing resides somewhere between quintessentially English free jazz playing of Derek Bailey and the American avant-garde styles of Rudolph Grey and Thurston Moore. Very minimal effects on the guitar maybe just a bit of overdrive. On the title track, bass fiddle extraordinaire John Edwards joins the trio for a quarter hour romp that's arguably the best piece on the album. His playing really fills out the sound and his presence markedly increases the group dynamics, making for a piece that has more shading and nuance than the previous four.

All in all it's a very enjoyable album from a cast of players that have a long history in free improvisation. If you haven't heard the first Alan Tomlinson Trio release and like what you hear on this set then obviously you should pick it up as well, you won't be disappointed.
Paul on Wednesday, November 20, 2019
Share