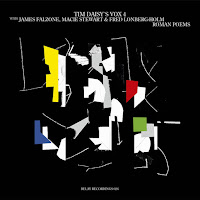 First, a reintroduction of sorts is in order. Vox Arcana is now known as Vox 4, updating the longstanding trio of James Falzone (clarinet), Fred Lonberg-Holm (cello, electronics), and Daisy (drums, marimba, percussion) to include Macie Stewart of OHMME and Marker on violin and piano.
Did the trio need an upgrade? Not as far as I was concerned – until I heard this release. The fact that this is the finest Vox release to date speaks for itself.

Quietly opening this suite is “Prelude.” With hard mallets on toms, wood & cymbals, Daisy duets with Falzone for a minute and a half - when they become embroiled in a duel against the string section, the music leaning into atonal disarray but not succumbing to it. Macie and Fred make good on their threat exactly 43 seconds into the next track, “The Collector,” when they smash into Daisy & Falzone head-on. Things get quickly sorted out though, with Daisy swinging like Blakey underneath a wild solo from Falzone. Daisy locks in with Lonberg-Holm, who is finger-picking the cello's hard-bop bass line. Another full stop-and-start with Stewart's violin leading the way as Lonberg-Holm kicks into electroskreech mode. And as soon as you have a grip on that, the theme's head appears again to close out the track – before ramming itself right into the next one, another crash-bang-fire whack of freedom noise featuring Stewart & Lonberg-Holm in an apparent victory duet.

This track, “First Travels” is an even more interesting ride than its predecessor, as its reach is broader in both scope and length. The first section is the duet of Stewart and Lonberg-Holm, of course, which ends on a sweet-n-sour slathering of beehive droning. The second section looks down the other end of the hive; and it's all sunny, damp and strange, made up of marimba and wire holding up some kind of sculpture in mid-construction. We spend awhile studying the blueprints during Daisy's subdued marimba solo, later becoming a fascinating duet with Lonberg-Holm. Falzone circular-breathes a note before the full band enters, with Daisy at the drum kit & Lonberg-Holm again in the bass role, the third section of the track. The fourth section is the collapse of the third and the vision of the phoenix that is Fred Lonberg-Holm.

“Intermezzo” continues with the chaos instigated by the cellist, now joined by the rest of the band – including Stewart on piano, who injects clusters into the firestorm of the rhythm section (Daisy on drum kit, Fred on “bass” cello) relentlessly. Piano & clarinet pitter-pat w/ Daisy's tapping, with Stewart eventually opting out – beginning the next track, “Classic Vox,” recalling Steve Reich without all of the instruments bleeding in and out of each other. Vox's approach, as we've seen up to this point, is the stop-and-start. Chords aren't going to weave into being; they're going to crash into birth. Of course, the crash comes at the 1:15 mark. [I don't want to give the impression that this is like Naked City. Vox 4 is much more organic than that - but they do cover a lot of ground in a short amount of time.] The remainder of the track takes you on a trip from Clarinet Chase Music to Flying Cutlery before dropping you off at a stop sounding not unlike the intro to “Prelude.”

“Litografi” begins with Daisy on marimba, in duet with Falzone, on a piece that sounds carefully composed – although one can never be sure with this band. Once Stewart (on violin) and Lonberg-Holm enter, the piece takes on a melancholy longing mixed with tension. It's at this point where it becomes obvious what a perfect musical match Stewart and Lonberg-Holm are, with her perfectly poised playing in the upper-register next to his everything-all-in approach. Bringing Macie Stewart into this group was a stroke of genius. Daisy's lone marimba closes this stunningly beautiful piece of music.

Closing the suite is the title track, named after the City Lights collection of Pier Paolo Pasolini's poems in their Pocket Poets Series. Daisy swings as Falzone plays the theme, followed by group improvisations that find Stewart, Falzone, and Lonberg-Holm jockeying for position at various points. The best bit is when it collapses around the three-minute mark with everyone contributing to a full-on shouting match that stops hard and begins abruptly with a solid-as-a-mountain drum solo from Daisy. The cheers of the crowd at the end jar me every time. It's such a perfect creation it's easy to forget this is was recorded in front of an audience. Bravo!