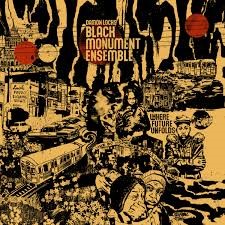 Where the Future Unfolds is a live recording of a concert at the Garfield Park Conservatory at the Red Bull Music Festival in Chicago on November 15, 2018. What originally was started as a solo sound collage in which Damon Locks, an African-American musician and visual artist, has sampled the speeches of prominent figures of the civil rights era to create an improvised palette for performance on his drum machine, finally expanded into the full Black Monument Ensemble consisting of 15 musicians (among them Ben LaMar Gay and Angel Bat Dawid), singers (alumni of the Chicago Children's Choir) and dancers (members of the Chicago Youth Dance Company Move Me Soul). The result is something one might call political jazz in challenging times. Locks also contributed the album cover art and wrote all the lyrics and compositions. The idea for this project came to him in a special place - in a prison: in 2017, he gave art lessons to eleven convicts at a time when police violence and racial profiling in the USA were actually returning to the media focus (the most prominent one was the killing of 18-year-old Michael Brown in Ferguson/Missouri, in 2014). Locks then went deep into African American history, he became interested in civil rights speeches - e.g. by Martin Luther King and Angela Davis - and used them as the basis for his musical project.

These spoken snippets give the album a militant edge, recalling interludes from the classic hiphop records, where speeches from activists were combined with funky grooves reminiscent of early albums by the Last Poets. Not only is the music an excursion into political activism and Afro-futurism, it’s also one into blues, gospel and the spiritual fire music of the 1960s. But the music is not only a hip retro project, it is rather astonishing how appropriately these quotations and the music represent the social state of the USA today. Lines like “Every morning there’s one cause of murder / every morning at least one lesser life / I see all the same things happen for my people / they tell the same line“ are gritty sentiments on the one hand but on the other they also radiate hope because they conclude with a call to action: “So we choose our next move / The time is now, it has always been / Respond anew / Pass the guard and get through, because some things never change.” In the way these statements from the 1960s can be sampled and re-organized, Locks’s album reminds us to have a look back at history and make sure that were not doomed to repeat it.

That’s why Where the Future Unfolds can be regarded as classical protest music. It speaks for the black community, it’s both musically and politically a statement about what is happening at the moment. W here the Future Unfolds sets the most beautiful monument to the self-empowerment of an Afro-American community in search of its roots in jazz. One can imagine this music as the soundtrack of a movement that has experienced its spiritual socialization with Archie Shepp, Malcolm X, John Coltrane, Public Enemy, Curtis Mayfield, The Art Ensemble of Chicago and Marvin Gaye.

Where the Future Unfolds is available on vinyl and as a CD.

You can buy and listen to the album here: