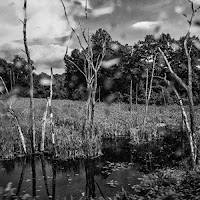 Jack Wright (saxophones) and Reuben Radding (contrabass) join Denman Maroney (hyperpiano) for six freely-played tracks across 63 minutes on this studio recording from 2005. Around that time, each musician was in the midst of collaborations that now characterize their careers thus far: Wright with Bhob Rainey, Bob Marsh, and Tom Djll; Radding with Daniel Carter and Nate Wooley; and Maroney with Mark Dresser, Ned Rothenberg, Hans Tammen, and Leroy Jenkins. Radding and Wright had just begun a rich run of live recordings the year before. And Radding and Maroney would later play together on Gaga and Udentity with Rothenberg and Michael Sarin (plus Dave Ballou on the latter). But this is the first recording with Maroney and Wright together. So Fuse offers a glimpse into this previously unreleased power trio during an especially fertile creative period for each of these musicians.

Maroney flits from melodic tunes ostensibly belonging to the jazz tradition to manic, muted, rapid rhythms on the keys to his idiosyncratic inside-piano work that can and does sound like an airplane flying too low to the ground, a broken jack-in-the-box, fireworks launching, clocks. He creates a beat by knocking on the wood, and uses cymbals or bowls inside the piano for more metallic percussion. Wright often sounds like Steve Lacy’s ducks, and draws attention to the limits of breath like Lacy does too, with short, petulant attacks. He’ll switch this up with long-held whistles. Occasionally a soulful note. And more breathy moments that sound like fluttering, farting, a toddler spitting on the cake trying to blow out the candles, or throwing sand. The tracks are sequenced in such a way that Radding seems to adapt to the timbral oddities of these two fellows. He begins with relatively pedestrian walking lines, then arco, then bow tapping, perhaps playing below the bridge, and eventually getting to creaking wood, violent plucks that slap the strings against the neck, and deep, resonant bowing during some moments towards the end. Each player is instantly receptive to the others’ shifts in timbre, rhythm, and dynamics, mimicking changes, tangentially building off of it, then returning. It’s more of a conversation than an environment.

The result is good old-fashioned free playing that feels like part of the American jazz tradition in its rhythms and tunes yet remains true to the characters of the individuals in its freewheeling timbres and structures. A welcome addition to Maroney’s recent archival releases from the mid-’00s that include last year’s excellent Bleu Boeuf with Barre with Barre Phillips and Unknown Unknowns with Leroy Jenkins and Rich O’Donnell.

Fuse is a digital-only release.