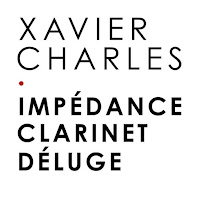 Impédance Clarinet Déluge is one half-hour track of overdubbed, multi-layered clarinet solos collaged from recordings cut in 2015 through 2017, performed and produced by multi-instrumentalist and composer Xavier Charles. It is his third solo release and, like Invisible (2010) and 12 Clarinets in a Fridge (2014), it emphasizes the moving air - especially breath - in the environment, whether it’s a pasture, a street corner, or a kitchen. All the sounds created by Charles went through the clarinet, whether out from in or in from out, with microphone placement sometimes in, sometimes out of the clarinet, with what I believe is accompaniment from birds and maybe bees, among other things. It serves as a succinct manifesto of Charles’ unique approach to sound, recording, and the clarinet that’s explored in his solo work.

Some sounds stay for some time, like a howling, white noise breath with a low-end pulse, a bee’s nest that could be many overdubbed clarinets or a hive but probably both, or a woody “woo-woo” siren. Some sounds are more transient, like rhythmic valve releases, something like the undulating resonant rimming of a crystal glass, a thrilling string symphony effect, drains, tablas, and crumpling from fetch across spit, what is probably birds, more recognizable clicks, wails, and blows from the clarinet, and some sections of split tones and multiphonics. Many more. It’s a soundscape of several layers cataloging extended technique for the clarinet with accompaniment from the recording environments. But whereas some such recordings might fall into ambience or feel static, Impédance Clarinet Déluge is thoroughly dynamic: volume from near-silence to deafening; register from tinnitus high to low enough to make most techno and hip hop producers jealous; pulse from rapid to flatline; and well-paced overdubbing of a menagerie of technique that doesn’t let sounds dwell too long or leave too soon.

It’s a satisfying continuation of Charles’ characteristic solo clarinet work, which by now should be considered as essential and exciting as the well-beloved Dans les arbres and Contest of Pleasures ensembles. It’s a kind of studio foil to John McCowen’s recent work demonstrating the dimensions of the clarinet through live performance in quartet, duo, and solo. Necessary listening for admirers of the instrument, and the quieter, extended-technique-based free playing that might be found from Michel Doneda, Stéphane Rives, and some echtzeitmusik musicians, among others.