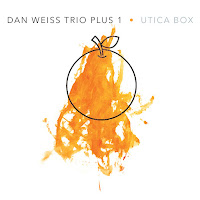 It seems every year there is at least one piano trio album that upends and reinvents one of the oldest formats in the genre. In this case, it’s not quite a trio, as the first transformational move made by drummer, composer and bandleader Dan Weiss is to add a second bass player. But the result is much more than the sum of its players, as Weiss and pianist Jacob Sacks are joined by bassists Thomas Morgan and Eivind Opsvik together and separately, the four together drawing on some of Weiss’s finest compositions to date.

Much was made, rightfully, of Weiss’s Starebaby, a fantastic album of metal-jazz with a band I was lucky to see live at the Angel City Jazz Fest a couple of years ago. That band delighted several of u s and has apparently recorded its follow-up album. In the interim, however, Weiss returned to one of his earliest groups, a trio with Sacks and Morgan. And the group jumps right into the deep end with the nearly 20-minute-long title track. The liner notes describes the subtle, gradual shifts of “Utica Box” as “a la Morton Feldman,” but this is texturally different from Tyshawn Sorey’s Feldmanian piano tri o . In Weiss’s hands, texture rhythm, and melody warp in unpredictable ways. In the opening minutes, the trio plus one balances Sacks’s piano with a loping, hypnotic beat. The combination sounds like a backing track custom-made for producer and rapper RZA. Later, when Weiss shifts into a hip-hop/EDM-inspired rhythm, it’s Sacks who restrains the group, maintaining a brilliant combination of timbre and tempo, as the meta-commentary of the titl e provides a framework for Weiss, Sacks, Morgan, and Opsvik to meditate on a seemingly linear melody from prismatic angles.

The album features three of these lengthier songs, “Utica Box” at the start, “Orange” at its center, and “Bonham” as the closer. In a number of ways, each one of these showcases Sacks’s mutability. He’s become one of the foremost players, with an ability to push himself to remarkable limits. Around the midpoint of “Orange,” he takes a 180-degree dynamic pivot that opens the door wide for Morgan’s excellent solo. Separating each of these extended tracks are relatively short excursions, “Jamerson,” “Rock and Heat,” “Please Don’t Leave,” and “Last Time One More Time.”

“Last Time One More Time” is one of the more contemplative and evocative songs on the album. The title, inspired by Weiss’s daughter, was, interestingly, one of his large-ensemble compositions, reconfigured for this quartet. I haven’t heard the other arrangement, but this appears to have been completely overhauled, as it fits the two-bass voicing beautifully. Morgan previously performed on David Virelles’s superb Mbókò, in a double-bass quintet with Robert Hurst, but he comes at Weiss’s music from a completely different angle, and his duet with Opsvik on “Last Time One More Time” is wonderful.

Throughout, I was repeatedly reminded of the album’s cover art, where an outline of an orange contrasts with orange paint in the shape of a pear. However Weiss does it (and it is an amazing feat), his music lives in a binomial space, each half provided equal room to breathe and stretch, or else both sides fold together into something like an orangear or pearnge.

Album available direct from Sunnyside Records, and you can visit Dan Weiss here.