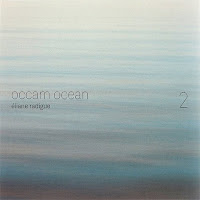 Radigue began composing for acoustic instruments in 2004 and for her Occam Ocean project in 2011. The project entails inviting individual musicians to her apartment and getting to know the instrumentalist and their relationship with their instrument. From there, she orally and aurally (and sometimes pictorially) communicates a composition for solo to that musician, based on that relationship. These compositions are broad strokes, in which moment-to-moment decisions are left to the performer, and less concerned with tunings than how overtones interact with and in the performance space. In the project, these solos are called occams, duos are rivers, and larger chamber ensembles are deltas. At this moment, there might be over 50 musicians involved with the project.

I was first introduced to the project when Nate Wooley performed his occam at the 2019 Big Ears festival ; I was not equipped to understand it well, yet it was still one of the most memorable sets of the fest. Then this past December, having gained awareness of the project, listened to the enchanting occams, river, and delta on Occam Ocean 1, and resolved to review this recording, I saw Charles Curtis (cello), Rhodri Davies (harp), Robin Hayward, and Dafne Vicente-Sandoval (bassoon) perform a medley of occams, rivers, and deltas in Houston, hosted by Nameless Sound. It is one of the most sublime performances I’ve ever seen. Each musician played sustained tones in such a way as to splay the overtones into naked audibility. Each sinusoidal fundamental resonating, synthesizing with its harmonics and those of the other instruments. Pulses hastening and slowing as the waves converge and diverge. Pure sound with personality.

I say “personality” because not only are the compositions intimately personal but, since an instruments character is largely timbral and timbre is largely determined by harmonics, these compositions and performances, despite sometimes sounding like pure sound waves, are deeply tethered to the instrumentalists and their instruments. It feels as if the performers present their very self. And that they give and take a little from the other performers through synthesis and divergence. Despite less overt interplay, it sounds more communal than most improvising ensembles. And despite the ascetic restraint of play, it is an ecstatic celebration of the musician, as a concept and an individual.

Radigue began composing Occam Ocean for orchestra in 2014 at Blondy’s insistence; ONCEIM first performed it in 2015 and recorded Occam Ocean 2 in 2017. It is Radigue’s first composition for orchestra. The macrostructure of the project mirrors the microstructure: Radigue met with each musician to communicate a tailored solo composition based on their relationship with their instrument. But the logistical realities of a large orchestra also required that Radigue meet with each family of the orchestra (strings, horns, saxophones, etc.), that Blondy conduct, with his own performance solo, and that the outline of the orchestral composition allow space for instruments that play sustained tones quietly, like guitar and percussion. The grander size of the orchestra moves beyond rivers and deltas, and the composition borrows its name from the overarching project, ocean.
And to even try to describe this music is to describe the infinite turbulent pathways of water molecules at the shore as just a wave. Like the smaller ensembles, it’s drone music in the sense that it’s concerned with overtones but, like worthwhile drone music, it’s not nearly as static as the genre suggests. Families of instruments (guitars, saxophones, horns, etc.) tend to enter and exit together.

The same emphasis on harmonic interactions is present but at scale. Eddies are gyres. The confluence of tributaries is the gathering of great oceanic tongues of mildly differing salinities and temperatures, densities. The sound is much more corporeal, the vibrations seismic. The first half appears to focus on more linearly introducing families of instruments and building resonance; the second half is more tempestuous, with many lines interacting with and reacting to each other. There are melodies and harmonies perhaps sensed but not consciously heard. It gets cathartic, cinematic. Emotive at the heart for all its intellectual intricacies. Full of pseudochaotic, polyrhythmic pulses to decipher and enjoy with each new listen.

Moreso than most music, Occam Ocean 2 suffers from recording because the bodily experience, the information gleaned from seeing the sounds emitted by performers, and the relationship of the performance to the performance space are all diluted. However, Radigue’s Occam Ocean project is woefully under-recorded for the increasingly inumerable combinations of musicians involved in the project, so any morsel received is worth treasuring. Occam Ocean 2 in particular because of the unique harmonic possibilities of the orchestra. I believe Occam Ocean has the potential to be seen as a watershed project, and for the many that can’t catch a performance, Occam Ocean 2 is a formidable touchstone. No wonder the Free Jazz Collective considered this to be among the best recordings of 2019 , and I quickly considered it among the best recordings of the decade .

Occam Ocean 2 is available digitally and on CD.