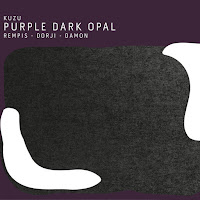 Kuzu hit the road in the fall of 2018 following the release of their debut album, Hiljaisuus (Astral Spirits, 2018). The refreshing and exhilarating sounds pressed into that initial recording were like a fanfare for one of the more exciting new groups of today. But, if we know anything about these three musicians, rather than resting on their laurels, they instead rolled up their sleeves and got to work. On Purple Dark Opal, we find them on day 15 of a 20-date tour - taken from a performance at Milwaukee’s The Sugar Maple in October 2018 (recorded just four days after Lift to Drag ).

For those of you who don’t know, Kuzu is Dave Rempis (saxophones), Tashi Dorji (guitar) and Tyler Damon (drums). They are the kind of group that refuses definition and shrugs off categories (understandable if you consider the breadth of their individual backgrounds). I can picture an iTunes algorithm crashing while trying to sort them into a genre (good thing Aerophonic doesn’t distribute through iTunes, or Amazon for that matter). They are a chameleonic creature: loud and messy, nimble and thorny, melancholic or ecstatic. Despite their disparate backgrounds, individual personalities, or unruly tendencies, they evidently filter it all through a singular concept to achieve that “Kuzu sound”. Purple is the result after putting that concept on the bandstand for 15 nights.

Purple consists of a single track, “To The Quick,” that sprawls for nearly an hour. It all begins in earnest with Damon’s solo percussion before Rempis and Dorji join the fray. As might be expected from an extended performance, the trio navigates a series of valleys and peaks and explores different configurations as if to turn over every stone along the journey. It doesn’t take much to get this group fired up. Rempis has a knack for motivic development as he manipulates creative rhythmic/melodic structures overtop Damon’s inventive stickwork and Dorji’s jagged attacks. He often trades fleet and blistering lines for gut-punched cries, or vibrato-laden hymns that carry severe emotional weight. As they dial up the heat, Rempis’s playing becomes an impassioned frenzy. During these heated moments, Dorji, the trickster that he is, uses mimicry as a tool and picks up on one of Rempis’s scalding rhythmic phrases to add to the chaos. Throughout all of this, Damon is the tenacious force that keeps the band boiling with his everywhere-at-once presence and impressive stamina. He also has a way of injecting a tight swing or quick-witted groove in the middle of a firestorm that leaves listeners tapping their toes or shaking their heads like, “how did he do that?” Surely the outpouring of his rhythmic ideas inspires his fellow bandmates into action.

Energetic peaks are followed by cooler, probing sections or a chance to experiment in a duo configuration. One such example forms 16-minutes in when Rempis drops out. Damon and Dorji exhibit an intricate level of interplay as they tap and clatter around each other in kinetic harmony. Dorji has an eclectic bag of tricks that he uses to manipulate a variety of clicks, scrapes, twangs, and booms from his guitar. He frequently employs pulsating drones that emulate summer-night cicadas or a mechanical cadence that become denser with the use of a looping pedal. While intensity is a mainstay for this band, they seem quite at home navigating through the more introspective sections - whether it’s a slow-burning dirge, a meditative calm of bells and breathy whispers, or a nervous rhythmic breakdown. They achieve an overall sense of momentum by the way they pass around rhythmic ideas: collectively running with some, using others to contrast the narrative. Do this almost intuitively at breakneck speeds and you can begin to understand how they achieve such an exceptionally tight sound.

So what is Purple Dark Opal? It is the sound of an extraordinary working band really hitting their stride. As a listener, we get the sense that these three have become intimately familiar with each other since Hiljaisuus. Like three old friends playing a high-stakes game of poker, they are embroiled in musical gamble that could derail in an instance of hesitation or failed bluff. But for all the runs, flushes and an all-in mentality, there is not a wasted minute where we catch them floundering. For existing fans or newcomers to Kuzu’s music, Purple Dark Opal is an essential recording that showcases this group’s prowess when left to their own devices. We should also tip our hats to recording wizard Dave Zuchowski for his brilliant work on both Purple and Hiljaisuus, among countless other albums. A live performance this good deserves to be heard in the highest of fidelity, and Dave delivers.

Purple Dark Opal is available as a CD from Aerophonic Records, and as a digital download from Bandcamp.

You can catch Kuzu on tour this March.

Thanks so much for the mention!