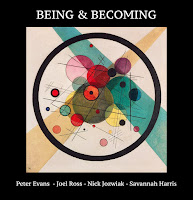 American trumpeter Peter Evans surprises us again. After some albums with very free improvisations, he composed this album for a quartet with Joel Ross on vibraphone,  Nick Jozwiak on bass and Savannah Harris on drums and percussion. With whom? Indeed. Young musicians, but with an incredible level of musicianship, both in their mastery of their instrument as in their capacity to feel the music.

"Being & Becoming" consists of five carefully crafted compositions, with room for improvisations within structured parts. And the result is baffling, to say the least. Evans assembled a whole array of influences, styles and approaches. Classical trumpet tones may turn into mad chaos, razor-sharp rhythm changes redirect the quartet at unexpected moments, repetitive unison phrases with minor changes and shifts that must require intense concentration by the musicians to perform. Terry Riley comes to mind, so does Philip Glass, but also Zappa (the vibes), or the fusion of Miles Davis (the controlled abandon), and then the band takes it all a step further, full of concentrated energy and nervous intensity, sophisticated but also raw, full of daredevil artistry, defying gravity and other natural forces. Some of the rhythm changes remind me of the best Rabih Abou-Khalil moments, while other parts are reminiscent of Indian raga in their complex lengthy patterns.

Evans is the lead voice, even if Joel Ross is astonishing in acting as a sounding board for the jubilant trumpet. I am not a natural fan of the sound of vibraphone, but not here. It is a perfect match with the trumpet and a perfect ingredient for this kind of melodic percussive sound. Harris is a loud and physical drummer, omnipresent and powerful, pulsing the music forward in its crazy development and intensity. Jozwiak is rock solid and like the rest of the band equally versatile in any genre or approach. And as good as the rhythm section is, Evans surpasses himself. Without showing off, his performance is virtuosic, whether rapid-fire blasts, more subdued soft tones or avant-garde multiphonics. Despite the complexity of the music, and the total uncharted territory of the journey, he guides his quartet and lifts them to where the music should go.

For me as a listener, this is an exceptional album. Not only because such a strong voice as Peter Evans re-invents himself in a way, but also because he creates a new approach to jazz composition, boundary-shifting while very accessible at the same time, with instrumental pyrotechnics that increase the quality of the music instead of harming it (in that sense it is far from being fusion). It is smart, uplifting and surprising ("is this really what they did? Did I hear well? I can't wait to hear it again"). It is intellectually crafted but delivered with a deep emotional energy.

It's been a long time that I've been so totally perplexed by a new album. Without a doubt one of the albums of the year.

Peter Evans has been open to playing with student musicians for quite a while. On the night when the title cut from Lifeblood was recorded, he subsequently played with a group of Oberlin students.

These musicians are definitely not students :)

Joel, for instance, is signed to Blue Note records...

Thanks for the nice review Stef!
P

Hi Peter, maybe I exaggerated it a little bit: I found that Savannah Harris is "currently studying journalism at Howard University" and Joel Ross is 23 years old (despite his Blue Note album). From my ancient age and perspective these are very young people ... and not very known. Congrats for the great band and album!

I heard this band live last year at Firehouse 12 in New Haven. One of the best nights of music I heard all year. Looking forward to hearing this recording.

It is undoubtedly what Peter Evans is used to, the factor of surprise. His music is not easy, of course he is far from fusion, he is a teacher who has managed to elevate the concept of creativity and virtuosity, that is; technique as a medium for music.

The existence of this music represents the fortune of living despite the calamities. It is a gift of life. Let's hope long life for Peter and us.