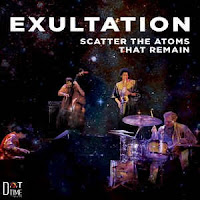 It was pure coincidence that I came across Scatter The Atoms That Remain’s album on the very same day McCoy Tyner passed away. Maybe since I was in a sentimental mood because of the great pianist’s death I was even more moved by this music. John Coltrane, Albert Ayler, Pharoah Sanders and the musical spirit of many other great musicians of the 1960s hovered through the air. You think that the old legendary John Coltrane Quartet has come to life again. It’s all spirit and magic, soul and heart (according to band leader, drummer and composer Franklin Kiermyer). However, in spite of all the reminiscences the band believes that music is not supposed to sound like something or someone, it’s supposed to do something. Then again, such music also raises critical questions.

Doesn't a band like Scatter The Atoms That Remain turn the music of that era (1960s spiritual jazz) into a museum-like affair in a way the Marsalis brothers and their adepts have succeeded in with their definition of jazz? Hasn’t such an approach detached itself from social problems (and hasn't hip hop long since replaced jazz as the relevant music genre not only for the African-American community)? Even if you concede that there is still its otherness, can (free) jazz still provide some kind of relevant function commenting on what’s going on in society? Or is it true that jazz has slowly come to a standstill somehow? Doesn't an album like Exultation evoke an earlier, idealized universe in which it was still possible to tell about a new future, or - in other words - when (free) jazz still had a utopian desire and looked forward instead of back? To cut a long story short: Exultation does not do that. The music is not just a mere re-invocation or a revival, it is not designed to simply encounter the familiar, it rather focuses on the rapture of finding so much avant-garde in this music. Considering that innovation has always been built on the old familiar (the good old Standing-On-The Shoulders-Of-Giants principle) and that it’s difficult to reinvent the wheel again and again nowadays, it might even make sense to look for the new in the old. Then suddenly side doors open up, hidden entrances are discovered, unexpected new connections are made.

In the specific case this means not a mere quotation of classic Coltrane tracks like “A Love Supreme Part II - Resolution“, “Chasin’ the Trane“, “India“ and Pharoah Sanders “You’ve Got To Have Freedom“, since Scatter The Atoms That Remain put a stronger focus on rhythm. This has mainly to do with the fact that the band leader is a drummer but also that Kiermyer’s style is more Art Blakey than Elvin Jones. He chases his bandmates like a sheepdog the flock. Saxophonist Jovan Alexandre convinces with the deep spiritual honesty of his sound and his crassly overblown lines, especially in “Transformation“, the album’s opener. Bassist Otto Gardner has the ability to make music swing with his unique and daring approach, yet at the same time his sound is powerful and warm as in the solo of “Between Two Suns“. Finally pianist David Whitfield’s sound is modest, rich and percussive, his lyrical improvisations are centered by powerful chords and create the tonal center of the music - just like McCoy Tyner’s style. His beautiful intermezzo on “Processional“ is a highlight of the album.
All in all, Scatter The Atoms That Remain is not about seclusion, they are more concerned with broken, frayed, not quite formulated strands of 1960s spiritual jazz. Exultation is not just another retro album, it deserves to be explored in its very details. I suppose not only John Coltrane aficionados will love it.

Exultation is available as a CD and a digital download. You can buy it here.

You can listen to the complete album on bandcamp: