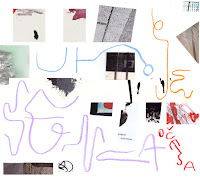 
The duo was, and remains, a favorite of mine as a listener. It surpasses the limitations of the solo recording or playing, while it engulfs collective thinking and acting. It is a minimal approach to sound making but at the same time two people can produce a lot of noise and equal amounts of pathos.

The duo of Kaucic on percussion, several objects and zither and Grom on double bass and voice is another low key release from Slovenia’s Sploh label. Could be their best, I’m not sure about this, but I can tell you it’s the first five star recording I’ve listened for 2020. Having recorded all the tracks in Kaucic’s home kitchen, the sounds they produce have an immediate and very warm effect on the listener. Like two close friends that chat, laugh and discuss upon the everyday trivialities while cooking, this is an improvisational on the spot recording in the way the great late John Stevens described it for the recording of SME’s Face To Face with Trevor Watts. Two people getting together, sitting close to each and getting into a non-hierarchical musical dialogue.

Even though this cd is a home kitchen recording, by no means it is a low volume or reductionist affair. Both the double bass and the drums can be high volume instruments and the two musicians know how t make them sound like that. The recording is separated into twelve smaller tracks like small vignettes or, maybe, like smaller chapters of a greater idea. Some of the titles seem really personal, others (in an act of not taking themselves really seriously) sound funny, but all of them seem in cohesion with the general linear approach of the recording. Sounds made on the spot, with each one of them being a step to lead to the other. A constant progress of ideas, thoughts, gestures that never saturate the listener but, quite the contrary, make you ask for more.

The homemade acoustics of the recording environment seem to work in favor of the recording and add to the aforementioned warmth of it. The duo has played together in a variety of situations and that shows on the interplay and mutual understanding of the two. Many highs and lows in terms of volume, while there is a polyrhythmic barrage of sounds coming from both instruments. Even though it’s hard to imagine that from two people improvising in a home kitchen, the recording has the feeling of the urgency of now. There’s a vinyl version as well, so beware.