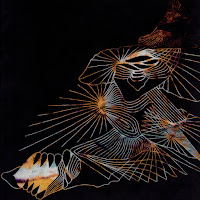 This behemoth is the second long player from the trio of Matt Nelson, Tim Dahl, and Nick Podgurski, operating under their GRID moniker. Decomposing Force is a blistering progression of the sound they forged on their eponymous debut album. The luminous heat and suffocating smoke continue to spread from the spectral fires they ignited in 2017, meaning that if you liked that, you will love this. The band manages to wrench a Lovecraftian nightmare from the spare instrumentation of the classic sax trio, with nary a trace of jazz to be heard, only a grotesque and writhing wall of shifting mutant sounds. Drenched in effects and amplification, the album was recorded live with all sounds focused on Nelson's microphone, fed through a pedalboard, and played back into the room through a monitor, setting up a wild feedback loop that the band rides throughout.

The first track "Brutal Kings" begins with relatively conventional, though particularly aggressive sounds. Nelson's sax spits and starts like a hot poker over the thump of Podgurski's drums and the thrum of Dahl's electric bass. Then at around the halfway mark the switch is flipped, and the listener finds themselves listening to something different entirely. The preceding characteristics fall away and the sounds morph into phantoms of themselves, howling at you from some other dimension. On "Nythynge" the percussion lays an uneasy framework for the surging electrical storm set forth by the bass and sax. The trio staggers, lurching through the track, messily trading licks(?) and barbs. The bass and drums eventually establish a steady, fuzzy murk against which the processed saxophone squalls and peels off in wild coronal mass ejections of sound.

"The Weight of Literacy" is a sustained amalgam of dread and gloom. Initially sparse and plodding, the trio unleash a melange of distorted, modulated pyrotechnics a few minutes in that poor quality speakers will have trouble keeping up with. The forest only grows thicker, denser, and more suffocating as the listener traverses the cut, until no sunlight can pierce the canopy. On the final track "Cold Seep" the collective feedback loop takes on a cavernous dimension, with the sounds ricocheting through incorporeal passages inhabited by unknown sightless life forms coated in bioluminous primordial ooze. An extended meditation of thud, scrape, and howl. A worthy follow-up to their excellent debut, Decomposing Force finds GRID expanding their sound while maintaining the sonic recipe that made them such an interesting listen in the first place. 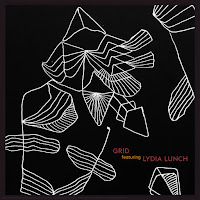 This single from GRID, joined here by No Wave's legendary high priestess Lydia Lunch, was released late last year on NNA Tapes. A moody deconstruction of jazz poetry, GRID drops a layer of din and squall over which Lunch channels the Beats' original muse Herbert Huncke. Aided with an effective vocal filter, she fields a great performance, excellently capturing the gravelly, self-aggrandizing dictation of that scene's most overlooked and influential proprietors. GRID reigns it in slightly to give Lunch a little space for her recitation, only occasionally swelling through the cracks of her pauses and rests. A worthwhile addition to your listening rotation, and an enjoyable update to the "Dead City Radio" approach.