Sumac and Keiji Haino - Even for just the briefest moment/Keep charging this “expiation”/Plug in to make it slightly better (Trost, 2019) ****1/2 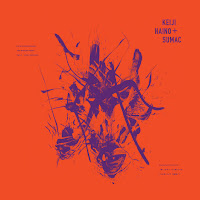 NB: I have omitted track titles, many of them are exceptionally long.

Reviewing this album gave me a good excuse to pick up the first collaboration between metal/post-metal super-group Sumac and the incomparable Keiji Haino, as well. What a treat. Keep Facing Sideways, You're Too Hideous To Look At Face On was hard, fast, and harrowing. After the success of that album, they decided to do it again.

Even for just the briefest moment/Keep charging this “expiation”/Plug in to make it slightly better is the result of that second round of collaboration. Especially for crossovers like this, when the chemistry works so well the first time, there is always the hope that the momentum will accelerate into the next session, but the risk (and all too frequently, eventuality) that it will flop. The former, applies to these recordings. As this album makes clear, the musical worlds of Sumac and Haino are not all that disjointed. Both have an affinity for heavy, accelerated, dark blues-inflected rock. Both have clear love for the harsher side of improv. Sumac might be doomier and scripted, Haino more demented and free-wheeling. Their musical terrain overlap considerably. And it shows.

Haino, the lead in these sessions, is in fine form, maybe even more so than on the heavier Keep Facing Sideways. His guitar melds sometimes beautifully with the steady, prog backdrop laid by Sumac. Yet, for as well as this collaboration works, Haino stands out, as he always does. Whether he is playing his characteristically warped guitar and vocals or contributing surprisingly sprightly flute and Taepyeongso (a Korean double-reed instrument), as he does on the first track. The second track is a more grinding, sludgy piece characterized by a plodding doom-metal rhythm, dueling guitars, and Haino’s howling vocals just barley cutting through the morass, only to submerge as a shrieking guitar rises to replace them. Around nine-minutes in, the tempo picks up and the guitars turn to feedback and distorted angular riffing. Track three is more improvised than the previous ones. It starts slowly, with musicians trading sparse strings of notes. These exchanges gradually come together in sporadic gusts of sound laced together by feedback-heavy wandering guitars. As long improvised pieces tend to do, the intensity wells and dips over its 29 minutes. I found Sumac’s contributions to this piece particularly interesting, as I rarely hear even prog-metal and post-metal groups engage in such opened and balanced improvisation. Drummer Nick Yacyshyn holds the beat, but only some of the time and, even then, conspicuously unsteadily. Brian Cook’s bass rumbles in waves, rather than discrete notes. And, Haino and guitarist Aaron Turner shred through that drum-bass tapestry. The final track offers a similar dynamic, albeit with a steadier, more composed backbeat and overlain with Haino’s vocals as well as some scattered crackling and wailing guitars.

If you like Keiji Haino, this album is another fine addition to his already wide catalogue. Sumac showcases and, at times, restrains his wilder impulses ever so slightly. The fact that the band are metalheads experimenting with improv avoids the struggle for the limelight that can sometimes happen when free jazz titans collaborate and provides some dense and gloomy foundations on which Haino (and, for his part Turner) build and, to avoid tedium, through which he frequently tears. Sumac does their thing, Haino does his, and they meld wonderfully. I am less familiar with Sumac’s other work, but, at the risk of stepping out of my element, I would also recommend this album to fans of Sumac. Haino drives the band to new improvisatory heights, sometimes detectably outside of their comfort zones. Nevertheless, Sumac consistently rises to the occasion with aplomb. The result is exactly what one would hope for.