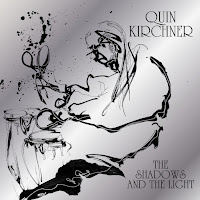 It was risky to release a two-album set as a debut. I really liked the first Quin Kirchner album a lot but I didn't think it held up completely throughout the entire four sides. It felt to me like the old “it would've been better had they chopped it down to a single disc” cliché was unfortunately correct in this case. Given that impression, I immediately had doubts upon seeing that the second release is a double album as well.

Thankfully, the joke's on my dumb ass because, based on the variety and high quality of music contained within the four sides of The Shadows & The Light, I'll bet Kirchner could've gone full Sandinista! on us and tagged on a third record and it would've worked out just as well. Whatever Astral Spirits spends at the pressing plant will all be recuperated quickly, right? This record is an extremely well presented & well executed cohesive work that is worth every penny that went into its production.

[I would like to state here that IN NO WAY should you consider not checking out Kirchner's first album, The Other Side of Time, released on Astral Spirits in 2018. That would be like saying “Nah, you should pass on those spotty double albums like Blonde on Blonde, The White Album, Exile On Main St., Second Edition/Metal Box, etc. They can't all be Trout Mask Replica or Harsh 70s Reality, now can they?” No one would say that. Even Twin Infinitives has an entire side that's marginal at best (Side 3) and I consider it to be my favorite record of an entire decade.]

I've nerded out too much. But not about The Shadows & The Light – and we're gonna fix that problem right now.

Y'know, there was a lot of awful crap on TV in the 70s. Stick with me. I swear this is going somewhere relevant. 1970s television: Mannix, The Rockford Files, Cannon, Barnaby Jones (which almost gets a pass because the protagonist was played by Uncle Jed)... Anyway, the television production companies back then still employed large bands to supply the soundtracks to those programs. They recorded the music that viewers ignored while they watched a car chase. Sometimes it just played quietly in the background while Telly Savalas sucked on a lollipop. At any rate, it wasn't great. ...Or was it? Percussionist Kirchner's band plays what sounds a bit like these TV soundtracks & the musicians are having an absolute ball with them. “At This Point In Time,” by Frank Foster, is so compelling I started daydreaming about outtakes of Mike Post sessions lying around in a warehouse somewhere in L.A. The track has a highly hummable theme played over a really nice groove by a large ensemble, followed by some wild freakouts initiated by the horn section. It's a novel approach that should not work in any conceivable way – and Kirchner and Co. knock it outta the park. When the musicians head back to the charts and move toward the fade-out, I swear it's sheer joy I feel. Seriously. The title track is also cut from this same cloth, but takes things one step further by augmenting the sound with an ECM vibe. The band is large and loose, but the sound is crystal clear and shimmering. It's conventionally beautiful, even as the chord progression takes multiple surprising turns, but has so many opposing styles happening it's a wonder it works at all. But here it stands, gorgeous, challenging, enthralling. After about seven minutes of the television soundtrack of my dreams, a piano solo begins. Block chord patterns set up the final section as Kirchner and bassist Matt Ulery enter. Then it's the mellow horns of a Gil Evans arrangement playing Steely Dan chord progressions. Wanna forget about what a shitty year 2020 has been? Right here is the place for me. Beautiful and smart with just the right amount of cheese? Yes, please.

High quality and variety, let's talk about that. On “Bata Chop” the sound of Rob Clearfield's Wurlitzer plays over a badass groove planting the listener squarely in a pot of bitches brew. “Shadow Intro” is a large percussion ensemble grooving away as Kirchner plays every instrument. The band covers Carla Bley's “King Korn,” where the main piano part is arranged for trombone, tenor sax, and bass clarinet (played by Nick Broste, Nate Lepine, and Jason Stein respectively). Stein takes a particularly blazing solo near the end of the track. Kirchner doesn't even play at all on “Star Cluster,” which is probably the most difficult listening piece on the album – and completely fascinating upon close inspection. The musicians take turns at playing a strong melody while the others play against each other. “Moon Vision” is a shorter stab at the 70s TV show thing, but more Quincy Jones than Mike Post this time. “Ecliptics” is a duo between Kirchner and Nick Broste that throws electronic washes over a killer groove cadence, highlighting Kirchner's masterful use of interesting textures. The entire band turns out for a reverential take on Sun Ra's “Planet Earth,” which manages to be both joyful and sobering in the great Ra tradition. This is followed by Kirchner's own “Jupiter Moon,” which features a lovely theme and ensemble presentation – and falls somewhere sonically between the Ra Arkestra and the 70s TV band arrangements. I enjoyed this so much that the first time through I collapsed into the sound like it was a pillow. The separation, the mixing, the textures of the instruments... It's impossible to imagine this being done any better.

The closer is a Mingus homage called “Lucid Dreams.” The head could actually be mistaken for Mingus himself, as it is so beautiful and calm, while remaining assured and confident. The song is old school without feeling old. An absolute stunner & a perfect closer to an album that I'm really still trying to absorb completely. I came SO close to giving this a full five-star rating – but I'm pretty sure we can save that for the triple album that will hopefully be Kirchner's next release.