Mexican-born, Berlin-based percussionist Emilio Gordoa, who readers might remember from The Balderin Sali Variations , kickstarted his label WildSonico this year. As of now, it’s a vessel to document his work with other musicians in and adjacent to the echtzeitmusik scene. It’s currently a digital-only label, though physical releases for some recordings seems likely in the future, based on comments from Gordoa. I review his two available recordings with clarinetist Michael Thieke but, at the time of this writing, he’s also released the promising Dislokal Harmonie with saxophonists Michel Doneda and Philippe Lemoine. 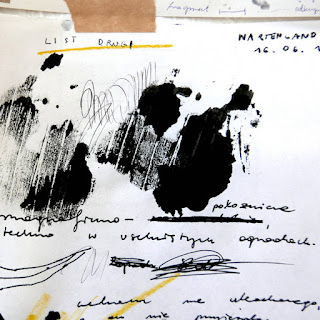 Warteland shares its title with the visual art installation of Lena Czerniawska, who provides the cover art for all three of WildSonico’s recordings (as well as The Balderin Sali Variations). The installation explicitly deals with the state and concept of waiting, including “the conducive feelings of confusion, repetition, reflection, focus, and introspection” that might occur while waiting. Gordoa and Thieke join Czerniawska for one evening of the installation in 2019 to record the music here, a 47-minute set divided into three tracks - labeled “start,” “middle,” and “end” - despite being sonically continuous.

As expected from this group of Berlin musicians, the music is a quiet, timbrally-rich soundscape created almost exclusively through extended techniques, with communication occurring less through rhythm, response, or counterpoint and more through volume, density, and pulse. The breathy beatings of a resonant clarinet might be met with an electronic oscillator, or an embouchure like a fluttering flame on a wood wick with a rolling and bouncing ball on the drumhead, or a howling wind with snare static, or percussive key clicks with drum and object accents. While similar sets flit around their sonic collage, this one does so at a quicker pace than usual, leading me to believe I’m hearing the music adapt to and communicate with the visual art occurring. A kind of dry-lipped, crackling smooching begins to sound like stippling, a harried tremolo like cross-hatching, a burst of bowed cymbal like drawing a bold curve, and stray snare hits and clarinet chirps like action painting. But maybe I’m only imposing this visualization on the music because I know visual art is present.

The audio-visual connection only gets stronger towards the end though, as Thieke drapes a nursery melody and train’s choo choo over Gordoa’s recording of pipe organ, creating a cinema-worthy cathartic moment by giving the listener something so familiar after so much unfamiliar. This fades to a field recording of birdsong, probably from a park, where you can also hear crunching leaves, car horns, and maybe the sound of running water, bringing to mind images of the riverlands that the title references. The tape warps away, and the clarinet ends with a sigh.

The audio of Warteland certainly creates a strong visual footprint; I can only imagine the visual art also creates an aural one. Maybe the imagination required to pull pictures from sound or sound from pictures is one of the very fruits of waiting that Czerniawska is getting at.

Wartleland is a digital-only release. 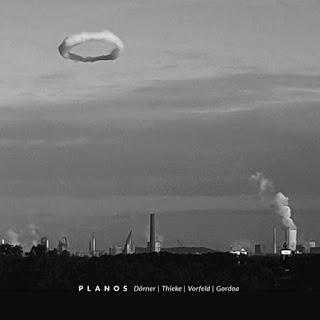 Planos adds trumpeter Axel Dörner and percussionist Michael Vorfeld to the previous duo. This 2016 recording is the first release for the quartet, though Thieke has recorded with Dörner in Splitter Orchester and Vorfeld on Nashaz with Andrea Neumann and Sherif Sehnaoui. It’s one such WildSonico release that’s likely to get a physical copy in the future; the digital release is eight tracks across an hour, but the last two tracks are titled as bonus tracks, only visible when downloaded or in the bandcamp app after purchase, and removing them brings the runtime to a neat LP length of 44 minutes.

The music here is sonically not unlike Warteland but can be viewed as a double duo, with Dörner and Thieke’s approaches to their instruments often stripping away the usual delineations between horn and reed to simply become two breath-based players. However, Gordoa occasionally distinguishes himself from Vorfeld by incorporating some vibraphone. And perhaps there’s not the explicit audio-visual aspects of Warteland here, but there’s so many moments of striking clarity and cohesion that if they were repetitious they would surely rival the widespread acclaim of new film score laureates like Ben Salisbury & Geoff Barrow, Hans Zimmer, or Jóhann Jóhannsson.

Some such cinematic moments might come from the trumpet’s fever pitch wail undulating like a siren, with a squall of scalular air notes and Doppler effects from swinging the clarinet, and austere bass drum and gong, and vibraphone ringing like an alarm clock, all combining to create high-tension drama. Or staccato bowed metal with clarinet chirping, trumpet radio static, and percussion like inside-piano inducing suspense. Or each musician approaching resonance so that their individual waves come one after the other like swash on the beach. The first bonus track is at least as interesting as the rest, with purrs, spit play, jungle animal sounds, raspberries, and muted clarinet like sōzu that otherwise don’t appear in the record, and at one point it seems as if two instruments begin to resonate with each other before they’re interrupted by the other two.

I feel that Thieke gives a little too much space and volume to the other three musicians, but this is nitpicking. For fans of this kind of music, this is a recommended set showcasing a mastery of musical color.

Planos is a digital-only release.