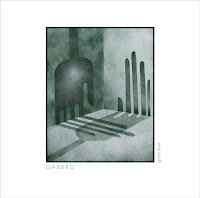 Ever heard of Gabbro? I didn't. Wikipedia offers some help: "Gabbro ( /ˈɡæbroʊ/) is a phaneritic (coarse-grained), mafic intrusive igneous rock formed from the slow cooling of magnesium-rich and iron-rich magma into a holocrystalline mass deep beneath the Earth's surface. Slow-cooling, coarse-grained gabbro is chemically equivalent to rapid-cooling, fine-grained basalt. Much of the Earth's oceanic crust is made of gabbro, formed at mid-ocean ridges. Gabbro is also found as plutons associated with continental volcanism. Due to its variant nature, the term "gabbro" may be applied loosely to a wide range of intrusive rocks, many of which are merely "gabbroic"." Get it?

Gabbro is also the name of a Belgian ensemble that derived its name from the definition above."As a child I had an obsession with stones and minerals and I had to think of that when we were making the first album. I thought it fitted the sounds of the baritone quite well", says leader Hanne De Backer who plays baritone saxophone and bass clarinet (interview in Psychedelic Baby Magazine). The ensemble's debut album was a duo performance with Marc De Maeseneer also on baritone saxophone. Their first album (El Negocito, 2017) was a raw sonic exploration by two baritone saxophones, violent and voluminous, oscillating between a locking of horns and the joint search for interesting harmonies. De Backer started playing alto at the age of nine, she switched to jazz quite late and to baritone even later, at the age of 25 because she liked the physicality of the instrument.

For their sophomore album, De Backer decided to expand to a quartet, with Agnes Hvizdalek on voice and Raphael Malfliet on electric bass. They were on the look-out for new sounds and resonances in places with a specific character, especially to work on the contrast between the freedom of improvisation and closed communities and spaces. Eventually they ended up in the prison of Antwerp in the wing where prisoners with mental problems are detained. The idea was to work with graphic scores and vocal readings by the inmates, together with other field recordings. Due to a prison strike, the whole thing was cancelled halfway and the core ideas were transferred to a more neutral venue.

In contrast to the first album, "Granular" is a very quiet yet intense exploration of sound and space. Notes vibrate in mid-air, floating, disappearing, to be succeeded and joined by fragile precious other sonic currents that are equally ephemeral, organised around a tonal center of maintained circular breathing.

De Backer explains the title "‘Granular’ refers to the details we we’re aiming for on this album. It was more about occurring ‘granulars’ of sound then harmonic movements or melodic lines. For me it also reflects to a certain ‘careful’ or ‘caring’ approach towards listening, something very fragile, both as a musician and human being. A very engaged way of listening without seeking fulfillment of certain expectations".

The tracks are titled as the days of the week. "Wednesday" has my preference, with its very dark undertones and Hvizdalek's unusual yet very effective repetitive vocal sounds, slowly surfacing above the tormented sonic gloom of the other instruments, which create an atmosphere of insistent and inevitable catastrophe.

"Thursday" is built around the plucking sounds of the electric bass with chords and flageolets underpinning eery and raw and angry baritone sounds.

"Saturday" starts quietly but evolves into the mad chattering of voice and saxes, chaotic and insistent, self-centred, pushed forward by the other noisy frenzy without actually interacting with it.

The album ends in deep darkness, with low sustained bass tones aligning with sparse monotonous baritone phrases woken up by the crystal-clear vocals piercing the silence and devolving into a massive sonic wall full of despair and desperation.

De Backer is an artist with vision. She is also active in literature, theater and performance. Her art is something deep and essential. This album sounds incredibly promising for future work.