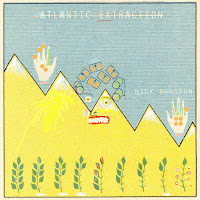 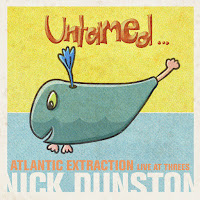 Bassist Nick Dunston’s debut, Atlantic Extraction, was a glorious bolt from the blue, the kind of exceptionally performed album you can turn over in your mind repeatedly, reflecting on its many angles and perspectives. Now, from Out of Your Head’s new imprint Untamed, Dunston has released a live recording, Live At Threes, providing a new and equally enthralling lens to view his compositions. Now, if someone handed these off without telling me whose albums they were, I might guess Tyshawn Sorey, even though the compositional language and drumming are markedly different from Sorey’s own. It’s the polymathness of the book that shares DNA with Sorey’s vision. Dunston plays on Sorey’s brilliant Unfiltered and the two seem to have a likeminded approach to composition and improvisation, as well as a keen talent for weaving layered performances.

Recorded roughly one year apart (Atlantic Extraction was recorded in March 2019, Live At Threes in February 2020), both albums feature the same quintet, with Dunston on bass, Louna Dekker-Vargas on flute, alto flute, and piccolo, Ledah Finck on violin and viola, Tal Yahalom on guitar, and Stephen Boegehold on drums. The studio album opens in media res with “Collage No. 2” before turning to the first major piece, “Tattle Snake.” An exceptional workout for the full quintet, “Tattle Snake” features Boegehold’s percussive drumming, matched with the group’s parallel movements.

In some very abstract ways, Dunston’s music also has echoes of Mary Halvorson’s Reverse Blue quartet, particularly with Dunston and Boegehold’s vibrant bass-drums pairing. Boegehold shares Tomas Fujiwara’s gift for an expressive ubiquity of rhythm. And Dunston, like Opsvik, effortlessly blends traditional genre motifs. Later, “Vicuña,” the centerpoint on which the album pivots, gives listeners a landing pad on which to breathe. Here, Dekker-Vargas plays a melody that, like a signal flare, marks a start and end to song proper. Her flute is playing throughout is phenomenal. Later, Yahalom plays a brightly toned solo, laid over a dramatic groove.

Of the sixteen tracks, there are a total of four collages (numbers 1, 3, 4, and 5) and three string solos (numbers 1, 2, and 3). On the surface, these act as curtains closing between acts. Having spent many more hours with the album, I’ve come to see these are serving a different kind of internal logic, one that instead draws back the curtain to show some of the machinery of through composition and improvisation fueling the bulk of the album. And if the album proper hinted at this conclusion, the live album scatters all previous conceptions to the wind. For one, the performance is much freer, at times guided by Dunston, Dekker-Vargas, or Yahalom. Each one picks at a thought from the composition book, signaling to the others one possible way to go. Finck seems a bit backgrounded by the mix, but considering the album was recorded on iPhone, there’s hardly anything to complain about. It’s a first-rate live album.

Atlantic Extraction is a fantastic album, one that made several year-end lists. With Live At Threes, readers have a chance to hear a stellar live version, as well. Both are recommended for readers, whether you’ve heard Atlantic Extraction or not, the two combined form a picture of the first act of what’s sure to be a grand career.