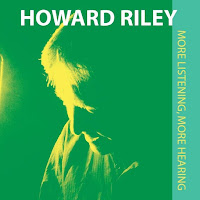 Preconceived notions can be problematic when approaching new works of a familiar artist. Howard Riley is one of my touchstones to determine how hard core people really are about this type of music; anything less than slightly glazed unfocused eyes and a hushed “that guy's incredible” after mentioning him and it's time to change the subject. He's amassed an incredible body of work in a variety of settings: trios with Barry Guy and Tony Oxley; duets with Keith Tippett, Jaki Byard, Lol Coxhill and Elton Dean; quartet work with Tony Wren, Larry Stabbins and Mark Sanders; and the London Jazz Composers Orchestra. And that's just an executive summary. But where he really takes flight for me is in his solo recordings.

One of these days, surely after he shuffles off the mortal coil, someone will do a retrospective summary of Riley's not small body of work. When that happens it will be difficult to avoid repeating, if not subtly rewriting, items from Brian Morton’s liner notes from this where he points out, among many other things, that “chronology doesn't seem to matter much in Riley's work”. Nowhere was that illustrated more than by the subsequent release on No Business, Live in the USA, of concert performances from late in 1976 sounding just as advanced as anything released. He seems to have emerged on the music scene fully formed in terms of having an oddly precise logical mind of figuring out how to make motifs work together that others wouldn't think of juxtaposing, much less doing it. He employs a walking bass line frequently, a deceivingly simple way of drawing the listener into comfortably familiar territory while dissonant fireworks happen with the other hand, a tendency he shared with Byard. And his works never outstay their welcome. Listening to Riley might be mentally challenging and even draining but it's constantly stimulating and engaging while never tedious.

One useful way to discuss Riley's solo work is “short stories” versus “long form”. Although they share the same internal logic, recently the pianist has adhered to the shorter format including the present recording, a followup to the 2018 Listen to Hear, recorded in the same studio on the same piano.

“Sunflower” is a song that goes back to his initial 1968 recording, Discussions, a trio date with Barry Guy and John Hiseman that initially was available in 99 pressings before Dusk Fire Records flooded the market with an additional one thousand CDs in 2015. On that recording it was a brisk barely over two minutes trio workout. Here, stretched out to a more leisurely almost five minutes, you hear repeated hints of Monk without any direct quotes. Riley has done Monk tribute albums, shared with Ellington, and recorded a “T.S.M. (With Thanks)" homage on Constant Change 1976-2016 but the joy of realizing an unstated influence after all this time is a sublime treat.

There are two versions of Jerome Kern’s “Long Ago and Far Away" here, similar to how there were two versions of two different original compositions on Listen to Hear. In all cases they're different enough to merit inclusion and of a high enough quality to think “why not?”

After the death of Keith Tippett I thought it was very important to review this. Although it's a daunting task to write about a musical hero, sometimes you just have to jump in the deep end and see what happens. That said after the first couple listens I almost begged off doing it. It sounded less vital than what I was hoping for and I didn't want to damn it with faint praise of a lion in Winter commentary on a not young musician with Parkinson's disease. So I consulted a trusty colleague who gave me some valuable advice: “give it a few more listens”. It was on the next listen that the pleasures of “Sunflower” made themselves evident.

Likewise with the rest of the compositions; there's not a song here that doesn't sound perfectly thought out and executed from beginning to end. There are plenty of uses of a walking bass, maybe not as persistently percussive as in earlier times but still performing the same function. This is music to be savored as it's added to an already large book of work.