Chris Pitsiokos -  Speak In Tongues and Hope for the Gift of Interpretation (Relative Pitch, 2020) ****½ 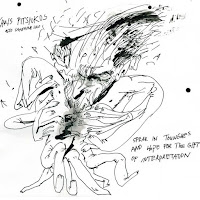 This new solo release from Brooklyn alto saxophonist Chris Pitsiokos really smokes. Captured on a portable recorder at a show in New Haven in January 2019 the six tracks are a great run through of the improvisational impulses and exceptional skill commanded by the saxophonist. Heavily entangled in the Brooklyn scene, Pitsiokos has collaborated regularly with Tyshawn Sorey, Peter Evans, Brandon Seabrook, Nate Wooley, Joe Morris, Paul Lytton, Susana Santos Silva, and others. He’s also a member of several groups such as CP Unit and Protean Reality and was recently in another write up here as part of the CPS Units’ latest with Devin Gray and Luke Stewart. Speak in Tongues and Hope for the Gift of Interpretation is his first solo long player since 2015’s Oblivion/Ecstacy and again finds him giving his horn all it can handle.

Pitsiokos starts the album off with a dedication to the Bird. The piece is imbued with a steady flowing stream-of-consciousness lyricism, pocked with gnarly honks and high pitched cries. The second piece, addressed to Anthony Braxton, meanders initially but gathers a ferocious momentum, increasing in speed and intensity before mushrooming into bellowing torrents of molten brass and splintered reed. The third piece is in homage to the great Roscoe Mitchell. Pitsiokos is in turns playful, over-the-top, soulful, brittle. Of all the tracks I enjoyed this one the most, as the saxophonist gives himself a little extra space at the front end to elaborate on some really colorful motifs before releasing the hounds.

The second half of the record begins with a dedication to Ornette Coleman. Long, heavy vibrations crackle like black powder sparklers, folded with irregular silences and finished up in peels of shrieking machine gun caterwaul. On his piece for Eric Dolphy the altoist sets off a constant stream of rattling, high speed symmetry over most of the track before downshifting into an extended and melodic gloaming. The last piece is dedicated to John Zorn, and it's on this piece more than any of the others that Pitsiokos really channels the essence of the subject. In all honesty if I had a blind listen I would have said it was Zorn. Pitsiokos channels multiple "strategies" in this short and intense piece, closing out the collection with some serious teeth. 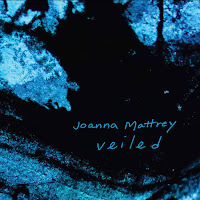 New York violist Joanna Mattrey was featured on two terrific releases in 2019, one with Sean Ali and Leila Bordreuil via their release I Used to Sing So Lyrical and another as a part of the J. Pavone String Ensemble on their album Brick and Mortar , so I when I saw that she’d released this collection of solo material I was anxious to have a listen. A regular improviser, Mattrey has collaborated with other downtown NYC heavies such as John Zorn, Marc Ribot, and Erik Friedlander and as a part of the Tredici Bacci ensemble. Veiled gives us a look at Mattrey alone and untethered, following her muses.

On "Ferver" Mattrey submerges the listener beneath a bed of undulating and wiry currents countered with a distinct, throbbing undertow. During the second half her pace slows and the resulting din she conjures serves as a portent for things to come. For "So close to the surface" Mattrey scrapes noisy, flowing, and effortlessly emotive lines from her instrument while a frayed drone glows against the dancing pitches. On "Stroh" she weaves an open-ended, melodically proportionate tone poem. The piece lingers somewhere in the fibrous layers that hold fruit to the rind, mainly structural but with intermittent hints of sweetness. Similarly "Waza" is a short, unapologetically wiry and frizzy construction of bow scrape and multiphonics. The abrupt pizzicato of "Shackles" permits an unexpected and slightly jarring shift in texture, where all at once the gauzy layers of the previous tracks condense to the sound of a popcorn night at the rubber band factory.

The second half starts with "A mouthful of dirt" which wails its lament from the start before briefly (suddenly) receding into a hushed micro-dialogue and a powerful reprise. I think the next piece, "Come to bury to exhume" is my favorite of the collection. Though there is constant motion I feel like so much more is hinted at than actually played. Almost like pieces are missing, but enough is given to discern their shapes. The short "Grey Eyes" cuts an icy figure against the previous piece, setting it's jarring pizzicato to a continuous, brittle scrape of rosined hair. "For the Thrall" starts out playfully percussive, gradually layering on warped abstractions that squeak, hiccup, and howl. The closer "Descant" is the final and longest piece of the collection. The first half of the dirge is mostly build-up, with Mattrey working momentum into her static arco before pushing into more uncertain territory where, similar to "Come to bury to exhume", she shades in darkness to elevate the light. Fantastic. 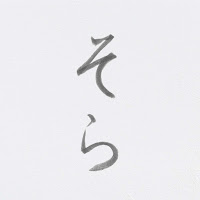 Sora is the most recent solo release from alto saxophonist and Fushitsusha co-founder Tamio Shiraishi. Shiraishi was worked out of Queens, NY since the early 1990’s and regularly plays solo sets in the NYC subway system which have accumulated a small but dedicated following. Much of Tamios’ solo aesthetic is build off of interactions with a physical space with both of his prior solos releases contain site-specific recordings of Shiraishi. His 1996 solo album Live Performance: 1992-1994 is comprised of performances in various Japanese locales, while 2010’s 地下鉄 compiles recordings of his NYC subway performances. This latest solo release was recorded in two locations, a concert hall and a studio, and true to form they play as much a part in the recordings as Shiraish’s horn.

Sora (Sky) doesn't translate well into a blow-by-blow style of review. Shiraishi's minimalism is only such on a macro scale, like Richter's grey paintings rendered in altissimo, his playing forces you to listen more closely in terms of the qualities of the individual pieces and as they pertain to the collection as a whole. But unlike most music you hear the phrase "deep listening" tied to, Shiraishi doesn't make it easy. His voice on the alto is challenging and resides on the extreme high end, far beyond the instrument's general utility. This album is a raw masterclass in Shiraishi's personal language of microintervallic saxophone. The song titles are all single shodō-style figures, which I’ll leave it to the reader to translate (ultimately due to uncertainty on my part).

The set is bookended by a pair of tracks recorded in October 2019 at Issue Project Room's cavernous Boerum Place, where Shiraishi cuts sets of thin, piercing lines that echo and superimpose through the space. Tracks 2 & 6 were recorded at the Thousand Caves in Queens, NY in June 2019 and find Tamio utilizing complementary electronics that are rendered sparsely and in stark contrast to his saxophone playing. The 3 middle tracks (3-5) were also recorded at the Thousand Caves but during an earlier session in November 2018. These ‘center’ tracks are notably the most distilled examples of Tamio’s alto playing here, recorded simply in order to make all nuances plain. This is a terrific album.