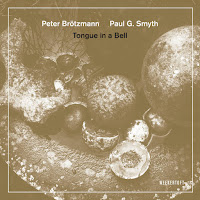 From the jump, Paul G. Smyth’s newest duo album, this time featuring Peter Brötzmann, is a rumbling, growling affair. Opening with Brötzmann in a haunted cousin of a middle register, Smyth’s early playing is equally haunted. “Tongue In a Bell” progress as a moving meditation, a deeply emotional pairing of the great saxophonist with one his rarer partners, a piano. It’s something easily forgotten, considering how vital Fred Van Hove is to Brötzmann’s catalog, but he seems to prefer guitars as an improvising partner. With Smyth, of course, the pairing results in a curious treasure, by which I mean a recording that wears its players’ curiosity on its sleeve. On “Falling Out of All the Towers of Space,” Brötzmann switches to tarogato, as he and Smyth head into a new soundscape. There are no assumptions presented here. Both players seem to be alternately asking and discovering, in equal measure. In that way, Tongue In a Bell is another in an increasingly long line of late-career Brötzmann albums that show him daringly vulnerable, as in his duo with Heather Leigh and his recent solo album.

Occasionally, albums get referred to as slabs, thick and heavy. This slab, however, remains a bright and energizing object. If its edges appear ragged, that’s entirely by design: look closer, each is honed to a razor-sharp point. It’s a testament to both the performance and the production. A live album, Tongue In a Bell is, like others in the Weekertoft catalog, expertly produced. The depth and clarity of the recording is exceptional, something Weekertoft continues to excel at.