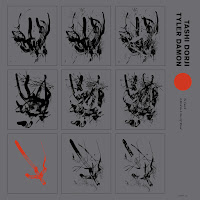 Let's cut to the chase. Dorji & Damon are rooted in rock music, not jazz. Like most of us, the jazz influence came later for them - after spending years of their lives immersed in the noisier end of the rock pool. Maybe I'm presuming too much, but I believe we all got here through similar – if not identical – channels. With that said, I am happy to proclaim that To Catch a Bird in a Net of Wind is Dorji & Damon's rock masterwork. Running through early Velvets to Sunroof!, everything you ever loved about rocknroll noise is elevated here to the highest plateau of tinnitus glory. These are improvised compositions constructed before your very eyes - and they remain standing as compositions for repeated listening pleasure. Summary: This is an excellent investment in recorded improvised music for your quarantine life.

This album was recorded live at Elastic in 2018 by Dave Zuchowski (and mixed by John Dawson) so you can trust that the sound is righteous. It's split between two long pieces, one on each side of the LP. The intro to the title piece begins with a Mahayana Buddhist invocation based on rattled bells and a White Light/White Heat guitar drone, setting the perfect tone for the events that will soon transpire. Dorji begins to add melodic figures on the top strings, which sound a bit like a Japanese shamisen. Damon's toms rumble before he gradually accelerates and spreads the beating onto the entire kit. As the melody stretches into looser chunks and higher intensity, Damon pushes back hard. Surprisingly, the inevitable collapse happens quickly.

The second movement of the title track begins with what we now recognize as the “proper” Dorji/Damon model: Damon's brushes flutter on the snare and hi-hat while Dorji plays behind the bridge in his now practically trademarked clang. Out of this emerges a looped E-string rhythm as some Derek-Bailey-meets-Sonic-Youth metallic skronk sprays over the top. As always, Damon is perfect, tumbling on toms, bashing cymbals for emphasis in all the right spots via telepathic brother magic. This music reminds me of what it was like to encounter Confusion-era Sonic Youth up through Sister for the first time. It was the only music that made visceral sense during the mid-80s. I'm getting that same buzz here in the BLM/COVID era with this record.

Flip the record over and you have “Upon the Rim of the Well” tearing your face off immediately, as Arto Lindsay & Lydia Lunch's hellchild scrapes and claws its horned head outta the womb while Andrew Cyrille tried to beat it back into the.. uh.. “well”. The birth eventually happens, but the child simply wants to beat on a pan while Ikue Mori pays the happy couple a visit and winds up accompanying the little tyke on her huge old floor toms. One big happy No Wave family.

Second movement. A Spanish dude obsesses over getting the “wrong note” part of Neil Young's “Southern Man” solo down perfectly as Damon taps on cans of spray paint. MGM's cartoon icon Crambone adds a little sparkle to the flat matte as WB's Speedy Gonzalez traipses through the sand mandala the monks started constructing during the invocation on Side A. Arto makes a final appearance: “You guys know I'm Brazilian and not Spanish, right?”

How can these two continue to improve upon this brilliantly intuitive construction? It's beyond me – and yet they always outdo themselves. I have to stop asking this question – and figure out a new way to heap praise onto these guys. Album of the summer, if not the year. Damn!

In my mind those two guys along with Bill Orcutt & Chris Corsano are the most exciting freejazz/free rock guitar/drums duo of our time.

Fotis, you are correct!!