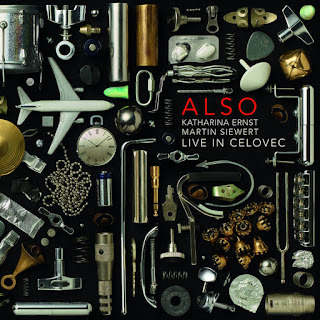 Live in Celovec is the second album of from the Viennese free-improv duo ALSO of drummer Katharina Ernst and guitarist and electronics player Martin Siewert, following Live at Wirr (Trost, 2016), recorded this time at the New Adits festival in Celovec, Austria, in November 2018. Both Ernst and Siewert are resourceful, multidisciplinary sonic alchemists, mixing in their individual work post-techno (Ernst with the Ventil band), art-rock (Siewert with the Radian trio), electronica, minimalism, and sound-oriented explorations (both). Siewert is also an in-demand sound engineer and he mixed and mastered this recording.

ALSO have been working for more than five years now and still enjoy fresh, unpredictable dynamics. Live in Celovec continues exactly where Live at Wirr ended with a piece called “Seven”, stressing the physical, eruptive nature of ALSO aesthetics. Instantly and quite organically, out of hazy, dense sonic explorations Ernst and Siewert lock on a thunderous, hypnotic groove, but don’t surrender to it, but keep mutating and sculpting it, spicing it with abstract noises, minimalist dreamscapes, industrial sounds and delicate guitar musings, in a similar mode to some of the freest moments of Radian. “Eight” varies the exploratory vein with open, atmospheric pulse and guitar sounds, still informed by raw noises, but highlighting the distinct approaches of Ernst and Siewert. She can form an effective pulse with few touches on the drums skins and the cymbals. He likes to dive deeper and wider and to offer each time a complex palette of rare sounds.

“Nine” lights an urgent, chaotic storm where Siewert’s atmospheric guitar lines- sounding at times as Terje Rypdal on steroids, crisscrossing the tribal rhythmic patterns of Ernst. “Ten” is a quiet, delicate, meditative dreamscape, focusing only on the bare, necessary resonating touches. These gentle touches reflect each other’s gestures but also build patiently the inevitable tension that resurfaces again and again with aggressive power and volume. This short performance ends with “Eleven” that contrasts Ernst’s nervous, possessed kind of drumming, with Siewert’s urgent search for a perfect match of guitar and electronics sounds, until this arresting axis of refracting and reflecting stops abruptly, leaving a burning desire to have more, much more from this right, potent stuff.