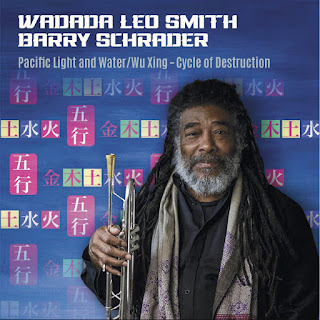 Electronic composer Barry Schrader was asked by Wadada Leo Smith in 2005 to create an 'overlay' work, a conceptual composition that could become the foundation against which he would create his own work. Smith's concept would focus on the various frequencies of light shining through the ocean at different depths, or filtered out. This idea of water inspired Schrader to use the concept of "wu xing", the Chinese cycle of birth and destruction, in which water is one of the five elements, next to metal, wood, earth and fire. Water ends the cycle of birth and fire the the cycle of destruction.

The Wu Xing Cycle of Destruction is "a fivefold conceptual scheme that many traditional Chinese fields used to explain a wide array of phenomena, from cosmic cycles to the interaction between internal organs, and from the succession of political regimes to the properties of medicinal drugs" (Wikipedia), which also includes some musical guidance for - as you may have guessed - pentatonic scales. 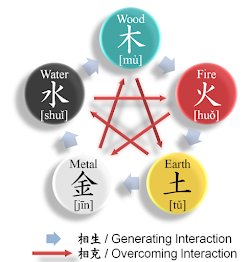 Schrader chose the idea of 'fire' to develop his composition contrasting it with Smith's choice of water. He then wrote it down in a graphic score that allowed Smith to further complete his side of the work on trumpet.
Are you still with me?
The total performance was recorded live at REDCAT in the Walt Disney Concert Hall in Los Angeles, and is not even 20 minutes long, but that does not bother.
The electronics are as sparse as the trumpet sounds, but darker and more ominous, with the occasional grumble or flare. Smith's sound is meditative, serene, and as powerful as usual. There are moments of complete silence. There are moments of agitation. Sometimes the electronics sounds like waves crashing, sometimes the trumpet sounds like crackling fire. There are moments of intense exaltation and moments of agony.
It is intense, unusual and magnificent.
Only 100 CDs were made, but luckily the digital version is available. The CD comes with a printout of the graphic score, some elements of which can be seen in the video below.