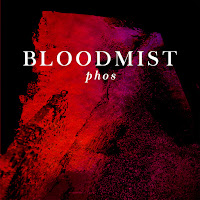 "Sheen", the debut album of Bloodmist from 2016 was reviewed twice on our blog, with very positive star-ratings. Today, their second studio release is available (they released a digital album with live performances called "Chaos of Memory" in 2017). The trio of Jeremiah Cymerman on clarinet and electronics, Toby Driver on electric bass (and artwork) and Mario Diaz de Leon on synth and drum machine is the same line-up as four years ago, with the exception that Diaz de Leon completely switched to a Tetrazzi synthesizer.

The band's deep sense of darkness, desolation and despair is even deeper than before. The liner notes describe it as an "expansive exploration of vivid hellscapes", which is a good description of what you get. This music will not cheer you up, but still it will be enjoyed because of the quality of the performance and of the sound.

The band's power lies in its uncompromising approach, they push their musical ideas to the limit, but in a smart, disciplined way, making sure the sound's overall texture and aesthetic are of high quality and maintained throughout the five pieces, which have pleasant names such as "Therianthropic Procession", "Incantatory Sentience",  "Corpuscular Refraction", "Pathogenic Panspermia" and "Empathic Predatory Biome", inspired by the movie "Annihilation". You definitely are in a different reality when you travel with the band through their sonic universe.

The entire performance was recorded in one session, but layers and contrasts where added in the extensive post-production.

We reviewed two albums with Jeremiah Cymerman earlier this year, both of a totally different nature in terms of arrangements and instruments, but with a similar sense of utter doom. High quality music that resonates deeply.

If Bloodmist delivers the soundtrack for armageddon, we may have something to look forward to.