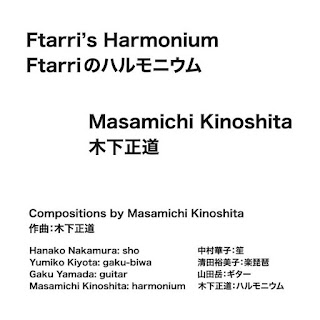 Hanako Nakamura (sho), Yumiko Kiyota (gaku-biwa), Gaku Yamada (guitar), and Masamichi Kinoshita (harmonium) perform three Kinoshita compositions running 50 minutes on Ftarri’s Harmonium. Clarinetist Michiko Ogawa recently second-hand purchased the as-of-now resident harmonium at Ftarri for a performance with Klaus Lang; Kinoshita, who typically performs on junk electronics, wanted to compose for and play the idle instrument. The compositions are each clever number games, evident in titles like →“47/19=2. 9/19,” “Count to 11!!,” and “17 Melodies, 13 Sustained Sounds, 1 Silence,” each with their own arcane rules. There’s also a certain mischief at play, with sho and harmonium or biwa and guitar frequently mimicking or blurring one another, two exclamation points juxtaposed by the number 11 in a title, or the guitarist’s name being the same as the particular type of biwa used. However, for all the fun in the process, the music itself is quite austere and processional.

“47/19=2. 9/19” features each instrument simultaneously sounding a chord, with the stringed instruments discretely plucking each note, allowing them to reverberate, and the “organs” sustaining the chord, with significant silences in between each chord. This game is based on a grid and the instrument relationships make it seem so. The guitar and biwa nearly mimic each other as do the sho and harmonium; however, the more prominent divide seems to actually be between the traditional Japanese instruments and the western ones. The higher frequency biwa and sho dominate the volume and space and remain static; the warmer guitar and harmonium showcase their timbral dynamics with subtle technique changes throughout the piece. Beyond the grid, the game involves a spiral too, but rather than sounding like these spatial processes the feeling is of disconnected points in space. It’s not necessarily a fun listen, but an interesting exercise in sound for sound’s sake.

“Count to 11!!” gives each musician a different way to count to 11, with successions of chords separated by significant silences. The instruments begin quite disjointed but soon fall into a rhythm of harmonium → guitar & sho → biwa (separated by type but joined by tradition) in distinct sections, eventually fully overlapping into a kind of headbanging beat before the guitar and biwa (now joined by type) build to an almost post-rock style crescendo.

“17 Melodies, 13 Sustained Sounds, 1 Silence” is certainly the most dynamic track, allowing the biwa and sho to breathe with a broader range of dynamics and techniques, like staccato flourishes and melodies respectively. The guitar and biwa play their melodies, now with a bit of more obvious interplay, and then the sho and harmonium play their sustained sounds, now rich and with movement, separated with silences, but after several cycles all of the instruments begin to overlap and the result is actually quite listenable and emotive. We finally hear the warm pulsing hum typical of the harmonium as a kind of treat at the end.

There’s quite a bit of fun composing, and there’s a smart use of timbre, but the music teeters on the edge of feeling static and sterile. Still, Ftarri’s Harmonium is an excellent listen for those interested in the intersection of traditional Japanese musics and modern composition and play. Hopefully it provides a doorway to more widespread work from Kinoshita, who has displayed considerable talent here.