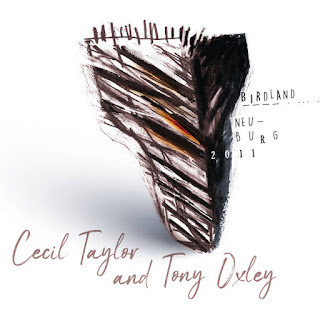 In the aftermath of Cecil Taylor’s passing on April 5, 2018 there was speculation as to what unreleased material would eventually be forthcoming. It's fair to say that record labels treated Taylor as a difficult to categorize genius whose output would appeal to a very select audience, and a sporadic stream of releases whetted the appetite of the cognoscenti without flooding it. But the passing of a giant usually produces a surge of curious interest; for my part I sent a link for the solo part of Spring of Two Blue-J’s to people I knew who were unfamiliar with his work so they’d be aware of what he did should his name ever come up in conversation, and received very positive feedback. There's also the need to fill some gaps in Taylor’s corpus to chart his artistic trajectory more fully. So far we’ve had Poschiavo, Corona and Conversations with Tony Oxley, Duets 1992, music from 1976, and now the current album.

Recorded in November 2011, it’s the latest in time of the currently available recordings of the Taylor/Oxley duo: Leaf Palm Hand (FMP, 1989), Ailanthus / Altissima: Bilateral Dimensions of 2 Root Songs (Triple Point Records, 2010) and Conversations with Tony Oxley (Jazzwerkstatt, 2018). Something which sets this apart from Taylor's other European recordings during his later years is that it took place in a club seating 112 people rather than a concert hall or festival. The intimacy of the setting allowed both to play more subdued passages without concern for filling a cavernous sound space. The concert has been divided into one piece of almost 42 minutes (banded into parts 1a and 1b on the digital version, a distinction without an apparent difference) followed by a second track of over 15 minutes. The recording captures the acoustic nuances of both artists.

Colin Green and Martin Schray, who were extremely helpful and supportive of this review, have written extensively about the relationship between the pair which began at the Berlin ’88 festival. Taylor welcomed the way Oxley responded to and often anticipated his playing, using percussive figurations both reciprocal and challenging. From the start the listener knows instantly this is Cecil playing unaccompanied on the club’s vibrant Bösendorfer, whether from his uniquely percussive touch and use of pedals or his employment of motifs and clusters familiar from at least as far back as Unit Structures, referencing sheets consisting primarily of notes grouped and linked using letter notation from which he would draw and improvise as the moment struck him.

Oxley doesn't enter until the 3:30 mark with splashy cymbals and a taut, struck bongo, tracing dancing contours. His kit is pitched higher than is standard with each cymbal chosen for its characteristic pitch, resonance, and decay rate, from gong-like reverberation and cow-bell scrapes to sizzling hi-hat and clipped, bell-like rings. Rather than a generalised metallic wash there’s a collection of district timbres that cut through the sound of the piano without obscuring it, a layer of textural lucidity that complements Taylor’s playing. Every so often you hear the bass drum, more for muffled accents than a time keeping function. Repeated listening increases appreciation of what Oxley does, reacting to the piano with jarring rhythmic configurations and unexpected accents, or twisting layers of metal and wood. Although this is a more introspective performance than the almost unrelentingly frenetic Leaf Palm Hand and subsequent Feel Trio dates, Taylor still creates tension by varying rhythms between motifs, working phrases back and forth, inverting them, and through dramatic bursts of call and response. Unsurprisingly, each time one listens something new emerges, or is heard in a different context. There’s a point where the performance sounds like it’s over, but after a brief pause there’s an almost throwaway coda, three leisurely triplets in the medium low register as a bare bones reminder of the material from which the piece began, as if to suggest, ”It could start all over again”.

The second piece is almost anticlimactic. The attention required to process what you're hearing is mentally draining in any Taylor performance and second pieces can get relatively short shrift. That said, often I listen to this by itself to get the full impact. I'm not sure if Taylor had a written outline or if it was a spontaneous encore but it’s a well-structured piece that takes perhaps slightly longer to reach energy peaks and seems to feature more of Oxley’s sharp ringing cymbal accents.

In terms of available recordings this is the current bookend on Cecil Taylor's music, though his performances from Kyoto in 2013 and Whitney concerts from 2016 could see a future release. Any career retrospective would surely acknowledge that his body of work was on a consistently high plane with many peaks and very few valleys. And Birdland, Neuberg 2011 merits inclusion as one of the lofty high points.

Yep - good review which I've enjoyed.
Maybe interesting to know is that Oxley played a tape during the concert for some minutes. And CT played along.
But no mention neither on the CD, nor when it was aired by the Bavarian broadcast some weeks after the event.
I was at the concert but haven't heard the CD yet. Not only my memory is adamant about Oxley's tape but I've two friends who recall it as well.
Also missing(?) from the CD is CT's intro reciting his poems.

It was a special experience/concert. Almost as good as the duo's concert in Berlin 2001. CT was so happy with the Bösendorfer that he kissed the grand piano after the fulminant concert.

Yes, I was there as well and remember it, too- as well as meeting you, Ernst :-).
The recital of his poetry was a bit tedious, but CT was in a great mood, The piano is legendary.

Ernst, you say you’ve not heard the CD yet, but it’s exactly the same recording (albeit with different track divisions) that you uploaded to Inconstant Sol in 2013, from which you removed the links when this CD was issued:

Surely, you’ve listened to this recording many times.

Re: Cecil’s recitation of his poetry, this was often a preliminary to the music and a number of recordings excise it, even the DVD of the Taylor/Oxley concert from Strasbourg in 2009, Quatre Fois Vingt Ans.

@Martin - oh yes I remember our meeting! And acoustically the poetry was rather subdued and not really discernible for me - as mostly when I've heard CT reciting his poems.

@Colin - yes I've listened often to the recording from Neuburg. And I always preferred reading CT's poems (see my comment above).
Thank you for the heads-up to the concert video Quatre Fois Vingt Ans. Was unknown to me.