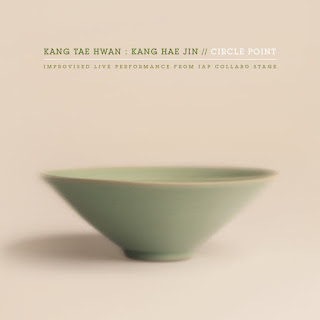 Alto saxophonist Kang Tae Hwan and violinist Kang Hae Jin play freely for 51 minutes across seven tracks on the stunning Circle Point. Tae Hwan has recently risen to prominence thanks to NoBusiness’ Chap Chap archival series, issuing key ‘90s recordings such as Prophecy of Nue, Live At Café Amores, and An Eternal Moment , with Chap Chap itself digitally “reissuing” his excellent eponymous record - featuring Otomo Yoshihide and Ned Rothenberg - just this year. Hae Jin, who runs Dancing Butterfly Records, operates in the spheres of rock, jazz, and classical performance but is perhaps best known for her work with the progressive rock group Superstring.

Though split into seven tracks with pauses, Circle Point documents a continuous live performance from 2019. I believe it is Tae Hwan’s first recording since 2011’s Sorefa. While there is certainly an increase in control of breath and tone since then, he employs many of the same tricks. However, those only familiar with his work on NoBusiness will be pleasantly shocked at the stylistic maturity here compared to those ‘90s recordings. Even long-time fans of Tae Hwan will find this violin pairing positively refreshing since so much of his recorded work is either solo or in trio with piano/percussion or guitar/percussion. It’s worth mentioning that this could also be considered a trio, with dancer/mime Yu Jin Gyu’s pattering feet, deep woody stomps, and some prop sounding like a lightly crashing snare audible at times. Concerning the title, Hae Jin envisions the energy of the performers as a circle and the physical elements of audience, space, and time as a point.

Tae Hwan’s trademarks are all here. His saxophone’s sonorous undulations like a pulsating desert sun; raving chirpings; overblown war horns; high-pitched squealing sustain; use of the full register; a focus on overtones; and ascendent spiral maelstroms achieved through circular breathing, reminiscent of Rothenberg’s “Continuo After the Inuit” or Anthony Braxton’s “106c,” for example. Hae Jin’s playing compliments and elevates Tae Hwan’s, with an authoritative style that reminds me more of Leroy Jenkins’ than any other violinist I’ve heard, blending folk fiddling with crisp classical bowing. The whinny of an eastern screech owl for Tae Hwan’s angry bird. High-pitched ghostly wails. Romantic sweeps across the violin’s range. Multiphonics and overtones through both short drones and absurdly swift sawing. An emphasis on circular play through a kind of looping glissando (“Circle I Reprise”), pointillistic sine (“Circle II”), or repeating scalular play (“Return to the Point”). The concept of circles and points feels loose but present in the techniques employed, with tracks titled after the latter more prominently featuring plucked one notes and sustained tones while those titled after the former spotlight the above techniques simulating sines and loops as well as the musicians’ signature snaking lines. For most of the performance, the duo is a give and take, with each musician communicating briefly before usually conceding space (though each reprise is a violin solo driving home the “point,” or the circle). But for the opener and closer, “Prologue” and “Return to the Point,” the duo more obviously builds together, increasing volume, space, and tempo to a satisfying frenzy. And the performance ends with an otherworldly, overblown, and distorted foghorn drone that morphs to a raspberry, to creaking wood, to a jackhammer, backdropped by furious sawing.

This loose concept of moving from the physical aspects of the point to the spiritual aspects of the circle certainly fits the transcendent listening experience Circle Point provides. Fun, freewheeling, and recognizably jazz. Timbrally deep and structurally sound, almost as if composed. Full of spirit. Highly recommended.

Circle Point is available on CD and digitally.