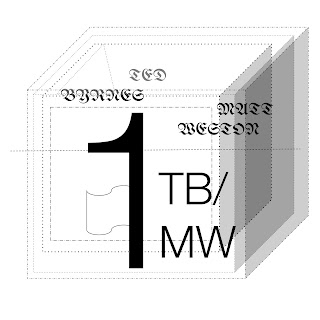 I have been following Ted Byrne’s non-linear discography for quite a while. Even though he stays below the radar, Byrnes is not under-documented. His duo with the saxophonist Michael Foster is an eye opener (same goes to his duo with Arrington De Dionyso on Astral Spirits), while his solo work proves that he is a skilled and exploratory improviser. Do check his latest trio (with Patrick Shiroishi and Daniel Wyche) again on Astral Spirits.

I first got to listen to Matt Weston through his dedicating a piece to Alexandros Grigoropoulos, the 15 year old boy that, back in 2008, was shot dead in cold blood by the Greek police. He has always been a mainstay on the underground of improvisation, working mostly solo on in small groupings. His latest vinyl Tell Us About Your Stupor, on his own 7272 Music, is a treat I want to buy…

This digital release is actually a split album. The first track, 'Jamie', is from Byrnes, while the second, 'Sleepless Sunstroke', is Weston’s. Even though they are both tracks that incorporate percussion only instruments, they seem to differ a lot. Byrnes utilizes all of his kit with a lot of energy and pathos, driving him and his percussion devices to their very limits. Only at the end of the track he seems to ease up, trying a different approach.

On 'Sleepless Sunstroke', Weston limits himself on less and dedicates his approach on timbre and the colors of sound he produces. His approach is subliminal in a sense. The listener gets a relaxed feeling while underneath the surface you can feel his sense of discipline in order to create a piece with cohesion and energy. And he does.

Both tracks, 'Jamie' lasts 10 minutes while 'Sleepless Sunstroke' is 13 minutes, follow different ways but of the same route: they explore the physical endurance of one’s mind and body, being, at the same time, works clearly made like messages in a bottle urgently asking to be read.

All proceeds from this digital release will go to a good cause, so you know what to do.