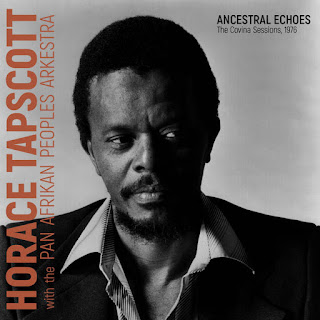 The Los Angeles-based composer/ pianist/ bandleader Horace Tapscott (1934-1999) has long been overlooked, whether because of his Los Angeles base or his commitment to community-based music. Most of the few commercial recordings he made as a leader that were released during his lifetime (Dark Tree, Aiee! The Phantom and Thoughts of Dar Es Salaam) were recorded during his last decade and presented him with celebrated support, including clarinetist John Carter, bassists Cecil McBee and Reggie Workman and drummer Andrew Cyrille, suggesting to some extent an elitist, internationalized image of jazz. But Tapscott was very much a visionary community bandleader, his affinities more with Sun Ra than the music business, his relatively obscure orchestral recordings appearing on his own label or Nimbus West between 1978 and 1979.

Tapscott moved from Texas to Los Angeles as a child and played as a teenager with contemporaries like Eric Dolphy, Don Cherry and Billy Higgins. Remaining in Los Angeles, he suffered from the largely racially defined economics of West Coast jazz: on one hand a bland and airy school of moonlighting studio musicians playing music of smug prosperity versus the hard-edged Watts-centered radicalism embodied in the work of Ornette Coleman, Cherry and Dolphy, music that shocked New York hard boppers when it escaped East.

Gastaut’s Tapscott project began last year with Horace Tapscott with the Pan Afrikan Peoples Arkestra and the Great Voice of UGMAA: Why Don't You Listen?, Live at LACMA, 1998 , an intense union of orchestral and choral energies from the last year of Tapscott’s life. But Tapscott launched the band in 1961, almost three decades before that concert. Ancestral Echoes presents the band near the middle of that long run, in 1976.

There are four pieces, ranging from 10 to 27 minutes. Details of who plays on which track, apart from soloists, are unavailable, but there are 21 musicians in the list with three others added as possible participants. The band is called an Arkestra, and that’s no idle imitation: it’s a declaration of solidarity and identity, music played with an intensity that suggests it’s a way of surviving. The music sometimes suggests roots in Ellington, but more particularly Sun Ra, Coltrane and, especially, Randy Weston. It’s strong on polyrhythms and ostinatos with an abundance of bassists and reed and flute players. Many of the musicians’ names will likely be unfamiliar. The only ones that jumped out at me immediately were Red Callender, who gave Charles Mingus bass lessons, here playing tuba, and trombonist Lester Robertson, who played regularly with Gerald Wilson’s big band and may be most frequently referenced as the inspiration for Dolphy’s “Les.”

That lack of celebrity sidemen testifies only to the degree to which jazz is, in some dimensions, an almost anonymous art, a creative force outside celebrity that is, at many of its higher harmonics, a transformative, extra-personal force, an archetypal expression. The poet Kamau Daáood intones a poem at the opening of Tapscott’s “Ancestral Echoes” that invokes “the shoulders that have carried us here,” accompanied by Tapscott’s piano strings. When the words end, Tapscott plays a powerful solo that will reference folk songs and also suggest affinities and allegiances with his generation of pianist/composers, among them Muhal Richard Abrams and Andrew Hill, before settling on the complex ostinato that will bring the orchestra to the fore. The orchestra, a complex pulsing force, keeps pressing the soloists ‒ trumpeter Steven Smith and soprano saxophonist Jesse Sharps ‒ to reach individual peaks.

Tapscott’s “Sketches of Drunken Mary” is more richly orchestral, an Ellington throwback with wobbling rhythms and dissonant harmonies that drift toward Mingus. Alto saxophonist Michael Session plays with an emotionally rich blues flavor intermediate between Parker and Dolphy, while Aubrey Hart flutters forward on flute. “Jo Annette,” composed by alto saxophonist Guido Sinclair, an Arkestra member who doesn’t appear here, is closer to advanced hardbop than Tapscott’s own pieces, but it provides a strong bedrock for the rushing tenor saxophone extrapolations of Charles Chandler who stretches tumbling, Coltrane-like lines towards multiphonics, a kind of transparency that flows naturally to Wendell C. Williams’ burbling French horn.”

The final track is also the longest and most complex, “Eternal Egypt Suite,” composed by tenor saxophonist Fuasi Abdul- Khaliq. Moving through long solo passages by flutist Adele Sebastian (luminous) and Tapscott (pensive) it eventually collects its orchestral energies around a lock-step repeating figure in the third movement to launch trumpeter Smith. Then comes the fourth movement, Abdul-Khaliq’s own gathering firestorm a torrent of expressionist energy, first swarming and roiling against Tapscott’s insisting, ascending punctuations, then against the orchestra, then relaxing with Tapscott’s piano, only to build to a final paroxysm at once lyrical and manic, focussed and diffuse, before the ensemble encapsulation.

The liner booklet includes informative and moving reflections from several members and associates of the band, and a quote from Tapscott appears as epigram: “Our Music is contributive, rather than competitive.” It would have been nice if this music had appeared when it was made 44 years ago, but it’s just as significant that it appear now, with all its energy, meanings and relevance still intact.

....and mention must be made of the late Tom Albach who did so much to document Horace Tapscott and Co on his Nimbus Record label.

Horace à community music and arts activist... thank you for giving us this openess in the the L.A. AREA and inspiring so many young musician''s....

Following up on the mention of Tom Albach. Nimbus West is back up and running with new releases from the archive and more, despite the tragedy of Tom Albach's passing late 2020. Not a lot of press out there about the resurgence of the label. Partner Matt Whitehurst is carrying the torch forward with the blessing of Tom's wife. Hopefully many more great releases to come.

Following up on the Tom Albach comments. Many do not yet know that Nimbus West has is back up and running, despite Tom's passing in late 2020. Tom's partner in the label Matt Whitehurst os carrying the torch forward, with new releases from the archive and a few exceptional reissues. www.nimbuswestrecords.com