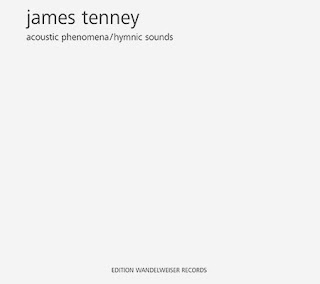 On Acoustic Phenomena/Hymnic Sounds, Ensemble OPEN MUSIC Gera perform two James Tenney compositions, “Harmonium #2” and “Critical Band,” which highlight the late composer’s proficiency in sound synthesis, tuning systems, spectral music, microtonality, and listener perception trickery. Members of Zeitkratzer and Zinc + Copper plus local musicians formed the ensemble to bring more avant-garde performance to the German city, and they do so here with a unique expertise. Zeitkratzer recorded these same two compositions 10 years earlier on James Tenney [old school] , and at that time the compositions were already in the group’s repertoire for 10 years. Zeitkratzer’s Jeffery, Phillipp, and Schlothauer no doubt bring their deep experience with these compositions to produce a more refined recording. There’s less woody vibrato from the strings, less tinny distortion from the horns, the discrete contributions of the piano are abandoned for a more unified approach of only sustained instruments, and there’s a feint rattling (which I assume is from the piano) in that recording which is absent here. The sound seems more distilled. As extensions of Tenney’s climactic swell pieces and with their sustained instrumentation, these works at least succeed as exciting drone music. Of course, there’s more going on beneath the surface.

“Harmonium #2” is a complex layering of chords, fundamentals, and partials that causes the listener to reinterpret the previous chord, toying with the listener’s perception of dissonance. Sonically, sustained tones enter and exit like theatrical players, partially overlapping. Creating texturally rich chords as they do. Tones overlap most in the center of the piece, and the musicians build volume to accentuate this climax, gradually decreasing again towards the end of the piece. The sustain is less sinuous, more straight-line than many acoustic drone pieces. The feeling throughout is almost simultaneously tensing and soothing.

“Critical Band” gets its name from the psychoacoustic term for “a frequency range in which the ear combines excitations into a partial sensation.” Or, creating the illusion of harmonic beatings - clear, sinuous, pulsing resonances - by adding distant partials close to a pitch. From the beginning, a sine wave is at the forefront of the music, dancing like a dragonfly on a placid stream of quieter sustained sounds. The ear is drawn to its fluctuating frequency. There’s not audible synthesis or a polyrhythm of multiple resonances. The contributions are more frequent and overlapped; this is more conversation and less monologue than “Harmonium #2.” The sustained soundings build volume as the piece continues, growing louder than the wave, drawing the ear from the illusion to its components.

As with James Tenney [old school], there’s a bonus track here as well. A short Scholthauer composition, “Accidental Microtonal Sounds - Together.” Wholly alternating between silence and sustained tones from all the musicians. Of slightly varying duration throughout the piece. Like bold brush strokes on a fresh canvas. Like “Having Never Written a Note For Percussion” on the previous recording, it serves as a kind of quirky contrast to Tenney while also being inspired in how fitting it seems.

I’m ill-equipped to understand or talk about the theoretical or technical aspects of this music. But, the tensing/soothing emotivity of “Harmonium #2” clearly indicates its methods. And something about the resonance in “Critical Band” seems off, in its build and its character, queuing the listener to its trick. Most importantly though, I’m consistently drawn back to this recording simply for its sounds, its textures. Highly recommended for fans of the quieter, sustained side of conducted improvisation, as sometimes performed by ONCEIM , CoÔ , or Golden Fur .