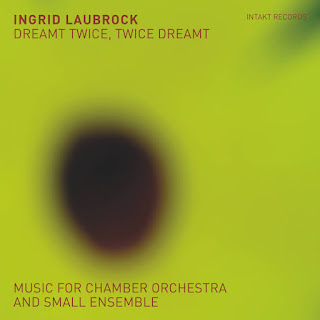 In recent years there have been some memorable projects from Ingrid Laubrock which display her considerable skills in marshalling small and large groups, treating composition and improvisation as part of a continuum of methods that both set the parameters for collaborative movement as well as stimulating individual invention – the brass-laden Ubatuba (Firehouse 12, 2015), the spiralling components of Serpentines (Intakt, 2016), and the weighty Contemporary Chaos Practices / Two Works for Orchestra with Soloists (Intakt, 2018), one of my top ten albums that year. Now, these two scales of thinking are combined in Dreamt Twice, Twice Dreamt (Music for Chamber Orchestra and Small Ensemble), a set of ambitious doublings occupying 2-CDs in which different kinds of expansion and reduction are prominent features. Inspired by Laubrock’s diary notes of her dreams, she wrote the small ensemble pieces initially (Twice Dreamt) and then “re-imagined” them for the orchestral versions (Dreamt Twice). They were recorded in reverse order a matter of weeks apart in December last year: CD1 with the EOS Chamber Orchestra at Riverside Studios, Köln, after several performances of the work, and CD2 in various groupings at Oktaven Audio, Mount Vernon, NY. The individual pieces appear in the same sequence on both CDs save that ‘Dreamt Twice’ opens the first and ‘Twice Dreamt’ closes the second, mirror images that bookend the collection. Laubrock suggests the discs can be listened to in any order.

The chamber orchestra comprises strings, woodwind, and brass together with a group of soloists: Laubrock (tenor and soprano saxophones), Sam Pluta (electronics), Cory Smythe (piano, quarter-tone keyboard) – a trio said to provide a sort of glue between the two recordings – together with Robert Landfermann (double bass) and Tom Rainey (drums). The conductor is Susanne Blumenthal who commissioned the work. For the Oktaven studio sessions there’s the core trio of Laubrock, Pluta and Smythe, plus contributions from Adam Matlock (accordion), Josh Modney (violin) and Zeena Parkins (electric harp) who are used sparingly; all six musicians only play together on one track. As much as with her orchestral writing the small ensemble reveals Laubrock’s ear for telling arrangements and instrumental colour, lush and austere, and in both settings she’s assisted by sympathetic colleagues with a firm understanding of her aims. The EOS Chamber Orchestra specialises in collaborations outside the standard “classical” repertoire.

There’s no attempt to recreate Laubrock’s sleep-time narratives; instead these are realisations of their emotional and dramatic shape. “Rather than writing programmatic music that reflects the dreams,” she says, “I would read a diary entry and attempt to re-enter the dream to compose from that state of mind.” This has resulted in a compendium of free-flowing, quixotic, occasionally disquieting pieces, and yes, dreamlike states where time opens out and incidents are magnified in flights of imaginative fancy, or compressed into jump-cut hyperactivity. Dreams absorb and conflate different sources and memories, and we can hear juxtapositions that parallel these troubling affiliations and discontinuities; “tears in the fabric” Laubrock calls them. Particularly in the small-group settings the electro-acoustic combinations make the familiar oddly unfamiliar introducing echoes, modulations, and the incongruous. Smythe’s elegant fingerwork takes on a slightly skewed dimension when played in quarter-tones, and the clarity of he and Laubrock’s interplay is blurred by the delays and interpolations of real-time sampling. Smooth, melodic passages sit next to abrasive distortions and vivid conjunctions pop up in unlikely places. Sonic collisions alternate with calm interludes.

‘Drilling’ features the entire sextet and begins with a dense conglomeration, thick layers in a gradual crescendo laced with anxiety, that’s reduced to a slender line, then supplanted by a melange of liquid electronics, violin scrapes, spiky interjections, and electric harp soaked in a plethora of pedal effects. After a momentary blackout there’s a strange shuffle from the accordion and the genesis of a tune on tenor, interrupted by tiny agitations but eventually breaking loose to close with a pensive melody, whose underpinning notes in turn provide the glacial chords that open ‘Drilling’ in its orchestral guise and from which its first half is formed. The second half ends with a funereal diminuendo against a screen of icy strings, the converse of how the small ensemble began its version of the piece.

Elsewhere too, the connections between the corresponding compositions are as variants in a new context, not simply a transposition for larger forces. Laubrock explains in her liner notes: “As I wrote the large-scale pieces, I often zoomed-in on a detail in a small-group version to generate a materially different large-group piece. It was almost as if the music was a Russian nesting doll – or a map of a map – and I was finding strangely-familiar “new” compositions within the already existing music.” She gives some examples of how musical ideas are transplanted and germinate in fresh surroundings. ‘Snorkel Cows” begins with arpeggios ascending softly on the piano, which are transformed during the chamber orchestra’s rendering into a series of massed, overlapping glissandi. The figures and microtonal shadings of ‘Down the Mountain, Down the Mountain’ find an equivalence in the large-group counterpart as they’re drawn out by the orchestra, divided into three units playing at independent speeds (requiring three conductors) and merging into a richly complex sound, the microscopic clusterings now a macroscopic mesh. The two versions of ‘I Never Liked That Guy’ explore the same mysterious idée fixe but from noticeably different perspectives.

As to the relationship between orchestra and soloists, the latter is more a term of convenience than an entirely accurate description. What impresses is the extent of their integration so that we hear orchestral parts and individuals in coordinated spheres of activity, sometimes occupying different zones, in other passages intermingled, within the texture rather than dominating it. The second half of the orchestral ‘Drilling’ is an abrupt change from the static blocks that fill the first, a maze of contrasting episodes, fixed and free. At one point a cycle of notes descends through the orchestra’s registers. Later, the phrase returns but this time it accelerates and moves in the opposite direction, rising through double bass, bassoon and french horn, then woodwind and brass. This quasi-mechanical process is repeated several times becoming faster, and joined briefly by Laubrock, surrounded by chiming piano chords and the swirling clatter of drums, and builds to a peak with each temporal strand finishing at the same point, followed by the doleful, aforementioned coda. On ‘Dreamt Twice’ the intricacies of the quintet are to the fore with the orchestra as a spectral backdrop. The focus subsequently shifts to instruments alone or in pairs, including a lovely exchange between viola, soprano saxophone and violin.

This music has been assembled with great ingenuity and care, full of refined details that emerge on each new hearing. Notwithstanding the web of connections you can leave such matters aside however, and listen to these works simply as a sequence of variegated soundscapes, each probing uncertain alterations of mood, emotions sometimes lying just under the surface, in a way that evokes the peculiar logic of our dreamtime selves.

Dreamt Twice, Twice Dreamt is available on CD and as a download , including 24/96 hi-res. Again, one of my albums of the year. Treat yourself this Christmas – goodness knows, we need it.

A revealing look at the small ensemble sessions: