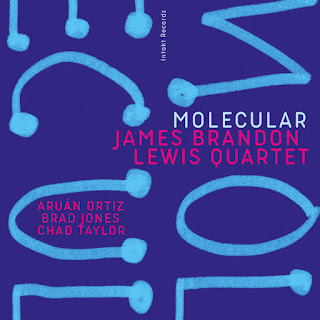 Composer/saxophonist James Brandon Lewis had a great year release-wise with Molecular being his fourth offering overall after his terrific 2019 release An UnRuly Manifesto . The other three releases are a burner with John Edwards and Mark Sanders 4.2.19 that was released digitally by Cafe Oto (thanks to Colin for the heads up), the excellent Live at Willisau with drummer Chad Taylor that finds them revisiting some of the material from their excellent 2018 album Radiant Imprints (with gusto) at the historic festival (out on Intakt as well), and a new release from Heroes Are Gang Leaders (titled Artificial Happiness Button ), the literary jazz collective he started with poet and professor Thomas Sayers Ellis in 2014. Molecular again pairs JBL with Chad Taylor, joined here by pianist Aruán Ortiz (who also has a dynamite 2020 release on Intakt called Inside Rhythmic Falls ) and veteran bassist Brad Jones. The title references JBL's Molecular Systematic Music approach which draws some of its logic from molecular biology and the structural components of DNA (explained better in JBL and Peter Margasak's liner notes).

A thrumming bass line kicks off album opener "A Lotus Speaks" before the rest of the quartet drops in to state the theme. JBL's playing is fierce but measured and there are some really great complementary/counter melodies laid down by Ortiz. The next track is the ballad "Of First Importance" on which JBL applies a breathy tone with a wide, mournful vibrato. It's an absolute stunner that begins stately and gradually becomes more emotive and visceral. "Helix" is the first truly uptempo piece on the album and features great (albeit brief) solos from each member of the quartet. JBL takes the attack off his playing, making the notes sound as if they are coming out slurred and backwards. "Per 1" is a brief piece with a steady 4/4 beat that finds JBL and Ortiz locked in a dance over the rhythmic backdrop. It's quick and to the point. On the title track the quartet stretches out a little bit and you can more clearly hear the band working through the new approach. Ortiz and JBL work out extended, ardent solos playing off each other, winding down the piece in an increasingly embellished vamp of call and response.

"Cesaire" is brief at under 3 minutes but features some vicious sax work and a persistent cowbell that livens Taylor's percussion. The track flows along before erupting over the final 20 seconds. "Neosho" ratchets up the drama with a flowing piano stanza accompanied by gruff arco and swirling cymbal hiss. JBL states the theme and goes quiet, giving the rest of the band space to slowly wind up, then returns and blows the doors off. This is followed by "Per 2" again finding Ortiz and JBL trading licks over a powerful rhythmic accompaniment from Jones and Taylor. "Breaking Code" is another ballad, and a doozy too. JBL plays in a gritty tone, again applying a wide, wavering vibrato to emphasize the blue in the brooding theme. His solo is an extended flight of nimble finger work and emphatic blowing. I could listen to the guy play all day, just excellent. On "An Anguish Departed" Ortiz embellishes his rolling vamp before taking flight a brief, jagged solo. JBL plays the majority with a stabbing, staccato phrasing before softening at the end. Album closer "Loverly" opens with soft chords accented with a measured sax line before Brad Jones takes a terrific solo over the middle third. JBL transitions back into the pretty theme, stating it twice before leaving the piece to evaporate.

James Brandon Lewis continues his remarkable line of great albums with Molecular. His playing has a lot of reference points, Coltrane, Rollins, Lester Young, Ayler, and Hawkins to name a handful, but he's got his own fingerprint altogether, and it has become more and more distinct with every new release. It's exciting to see how he develops and grows from album-to-album, and with the release of Live at Willisau I'm doubly excited to see a live platter with some of these (and older) tracks aboard. A tremendous artist and another tremendous album. Highly recommended.