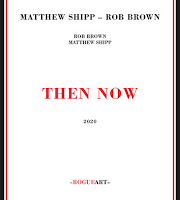 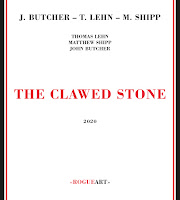 The piano/sax duo recording Then Now (RogueArt, 2020) captures Matthew Shipp and Rob Brown together at their assertive best. At the turn of the millennium, my CD copy of their Blink of an Eye (No More, 1997) had cracked unplayable. Then Now is their first duo recording since, and it’s remarkable how their playing today squares with my memory of them 20 years ago. The title, “Then Now,” seems less nostalgia than the realization that what was forward-leaning then feels right right now.

Though unrecorded as a duo since Blink of an Eye, Shipp and Brown have appeared together over the two decades since in many trios, quartets and other configurations. High marks include Right Hemisphere ((RogueArt, 2008) (where Brown and Shipp are ultra-sensitive over Joe Morris’s bass on “Red in Gray”), Magnetism(s) (RogueArt, 2017, a re-mastered re-release of a 1999 Bleu Regard disk with a bonus 2016 concert recording), and on the first disk of Whit Dickey’s double Tao Quartets release (Tao Forms, 2019).

Over a long career, Shipp has recorded with many extraordinary reed players: Roscoe Mitchell, Ivo Perelman, Joe McPhee, Marshall Allen, Evan Parker, lately with Matt Walerian on ESP-Disk, and, of course, David S. Ware who perhaps outshines them all. To my mind, Shipp’s playing with Daniel Carter and Rob Brown stands out for just how hand-in-glove natural they feel together. (Favorites with Daniel Carter include Strata (Hat Hut, 2004), Cosmic Suite (Not Two, 2008 and Not Bound (For Tune, 2017)).

Rob Brown is perhaps less storied than Shipp, but he has delivered his fair share of wonderful, Lower East Side NYC music, a mainstay, we might say, and like Shipp, his sound and musical idiom is distinctive and idiosyncratic. When my multi-gig library of music is set to random, Brown’s sound is instantly recognizable. Notable is his work with bassist William Parker’s groups In Order to Survive and the William Parker Quartet (I recommend O’Neal’s Porch (AUM Fidelity 2001)), and various trio and quartet outings under Brown’s name with Parker aboard (my favorites include Crown Trunk Root Funk (AUM Fidelity, 2008), The Big Picture (Marge 2004), and the early, indelible Breath Rhyme (Silk Heart, 1990), multiple outings in different configurations with drummer Whit Dickey (I love Trio Ahxoloxha’s Prophet Moon with Joe Morris (Riti, 2003), and a handful of notable recordings with cellist Daniel Levin. Special mention goes to Unexplained Phenomena (Marge, 2011), his Vision Festival performance with Chris Lightcap and Gerald Cleaver featuring Matt Moran on vibraphone. Y’all might also check out on youtube the 2018 free-for-all performance of Brown with venerable bassoonist Karen Borca, Michael Bisio on non-stop bass, and two percussionists (Whit Dickey and Jackson Krall) from VisionFest 23. In other words, Brown gets around.

The overall mood of Then Now is dry and fast-forward. There is very little use of silence. A singing sax over chunky chord progressions, gentle voicings, or vertiginous speed work, depending on the moment. Sliding patterns over sliding patterns. Brown’s sometimes piercing tone is pitch perfect. (For you sax geeks, I asked him many years ago and he said he plays a Ted Klum acoustimax. Sure sounds like the same mouthpiece on this recording.) Brown mostly plays it straight, allowing the natural pitches to do their work. The very occasional microtone or multiphonic. Otherwise he sings in a heartfelt, but reserved manner, and he takes the turns like how a professional skier might take on the black diamond slopes, wishing for just a bit more speed as the hazards effortlessly whoosh by. And damned if he doesn’t get it, mostly in the middle and upper registers. Brown plays squarely on the beat, and he doesn’t cheat. No swinging, but not mechanical either, with a subtle vibrato throughout. There is no flute on this record. I have loved Brown’s flute playing over many recordings: Orbit (Music & Arts, 1997) with Guerinno Mazzola and Heinz Geisser, and The Whit Dicky Quartet’s Coalescence (Clean Feed, 2004) (listen to the late Roy Campbell’s trumpet and Brown’s flute intertwine on “Steam”) come to mind. But that doesn’t show up here. Strictly alto sax.

Both Shipp and Brown play with intervals, goading each other into continuous alterations. Dance your way across a series of ladders lined up at different heights – no falling! Sometimes Shipp lays down heavy chord blocks, and Brown winds his way in and around them. Other times they are both running the numbers in, out and backwards—chasing bees weaving amongst the magnolias. Boxing and jazz seem like partners here, but they’re not trying to knock each other out; they spiral around each other like a double helix. Brown plays with a muscular assurance. Statement after statement. Nothing tentative. The patterns are under his fingers and his task is to sing out loud, select and edit, crop and extend. Shipp with his thick left hand clusters, and his right hand musical dance. Intimidating lower register stormclouds, and then descending intervals which set Brown off in a new direction. On track 5, Shipp plays solo as calm as calm; it stands in the center as a gentle respite from all of the jousting.

Moments on this record have more of a “new classical” feel than anything Shipp would have been willing to put out 20 years ago, more like some of his solo outings (c.f. One (Thirsty Ear, 2005) or Piano Sutras (Thirsty Ear, 2013)) or the quieter moments on Piano Song (Thirsty Ear, 2017) than the impeccable onslaught of Prisms (Brinkman ,1996). If I think about Shipp’s playing from Prisms to Then Now, the expressionism remains, it is his lyricism which has unfolded. Track #3 is a lovely free ballad, perhaps the stand-out track of Then Now, though they are all variations of the same vibration, fragments of a whole. Some fire; some burnt embers. Perfection---in the sense that free music is a chance undertaking, and these two have done it so well and so long together that it comes out as shared self-expression.

The Clawed Stone is a different animal. A trio featuring Shipp, John Butcher on soprano and tenor saxes, and Thomas Lehn on electronics. Where Rob Brown’s patterns on Then Now are typically analytical, Butcher’s musicality is filled with pathos, like sorrow songs, and where Brown plays it straight, Butcher here plays at the outer possibilities of the saxophone’s sounds. Butcher’s twitchy-ness (“Off-Kilter”), flutter bird calls, throat effects (“Re(as)semble”), and overtones stand in contrast to Rob Brown’s note-forward assertiveness. Brown is claiming full responsibility for his sounds, while Butcher wants to share that responsibility with sound itself.

The Butcher/Shipp/Lehn trio has met before, on Tangle (Fataka, 2016), a live 2014 improvised recording at Café Oto in London. Tangle’s first 3 tracks are each called Cluster. There is a certain formality despite the free playing. Shipp and Butcher in turn imitate and support one another, carrying pulse, groove and melody. Thomas Lehn is the wildcard with his idiosyncratic electronic beats, squawks, muffled fuzz noise, oscillating atmospherics and other unexpected insertions. Lehn is less playing with the other two then seeing the big picture and asking: what else could we be doing with sound right now? On Cluster III, Shipp’s patient sound blocks over Lehn’s deep-world-turning-dangerous, and Butcher’s sax/feedback entrance: Exquisite beauty performed live.

In a 2016 interview with Victor Stutz, Butcher describe his process/ethos: “. . . the interest for me in improvisation is making that kind of music which you couldn’t really imagine before you find yourself in the middle of it.” That feels fair. There is an aliveness to his playing which thrives in this trio setting, and which for Shipp in particular reveals new aspects.

Compared with Tangle, on The Clawed Stone Butcher more consistently emphasizes the outside of tone-making for the saxophone. (For more (with more natural reverb), seek out Butcher’s tremendous solo record Bell Trove Spools (Northern Spy, 2012).) On Stone, you rarely hear that distinctive tenor lushness which appears on Tangle. At first, Thomas Lehn’s contribution is just to add some ear fuzz and grit, but then his manipulation becomes more intrinsic—always at the edges, but subtly off-setting what is central—phasing, adding vibrating harmonics, feedback, clicks, bumps — just enough random to make it feel alive and unpredictable. Shipp’s rotating triads subtly sync with Lehn’s colored fogs and echo bursts. The added feedback electronics place Butcher’s trilling and vocalizations in an environment governed by forward-looking intention rather than tradition. The Shipp/Butcher/Lehn effort allows the accidents and incidental electronics to have their own say. Shipp in particular allows more space to let be what will be. From the listener’s perspective, I find my ears a bit more open, too, wondering how the sounds will fill out a home together– the smooth, the raucous, and the rough. “Links on Canvas” is lovely delicate, truly the plum of this outstanding record.

Many of Shipp’s recordings (I’m thinking of those with Michael Bisio (on bass) in duo or trio settings (from The Art of the Improviser (Thirsty Ear 2011) to Elastic Aspects (Thirsty Ear 2012) or Floating Ice (Relative Pitch 2012) to The Conduct of Jazz (Thirsty Ear, 2015)) feel like a working out of his personal vocabulary in public. In trio with Butcher/Lehn, Shipp is able to take the focus off of his sonic vision and interface with wildly different sensibilities. Maybe he has to listen more for the unexpected, so it arrives.

The Clawed Stone feels like a movement forward musically for Shipp, where Then Now feels like home-cooking. Both are beyond excellent. Depends on what you’re in the mood for.
Paul on Wednesday, December 02, 2020
Share