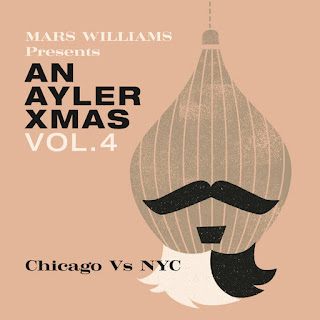 By Paul Acquaro
Last year when I reviewed Mars Williams An Ayler Xmas Vol 3, I wrote that I was hoping that this would continue to be an annual event - a new collection of Ayler/Holiday mashups to counteract the deadly ear-poison of 'All I Want for Christmas (is you)'. I also secretly wondered how Williams could keep finding new inspiration with the theme. Now, knowing the answer to both and I'm pleased to report that there is nothing to be worried about.
One thing that keeps this idea interesting is the ever changing set of musicians joining Williams on the stage. Last year there was a collection of tunes recorded in Krakow, featuring a collection of New York and European mmusicians. The year prior it was a selection from a group in the U.S. and a group from Europe featuring musicians from each continent exclusively. This year, we have Chicago vs. New York. Some new faces join the old in Chicago, and features, along with Williams on sax and toy instruments, Josh Berman on cornet, Jim Baker on piano, viola, and Arp synth, Kent Kessler on bass, Brian Sandstrom on bass, guitar, and trumpet, and Steve Hunt on drums. Rounding out the band (even further on some tracks) in Chicago is Peter Maunu on Violin, Katinka Kleijn on cello, and Keefe Jackson on baritone sax. In New York, Williams is joined by Steve Swell on Trombone, Hilliard Greene on bass, Chris Corsano on drums, Nels Cline on guitar, and Fred Lonberg-holm on cello.
Another thing that makes this yearly (fingers crossed) installment exciting is the evolving repertoire. No, I did not go back to see which songs have been on which album and in what order, that's for someone more OCD than me to do, but I have a simple explanation: it just hardly matters. The combinations change, the interpretations range from wild (see 'Did You Hear They Found Light in Darkness Looking for Chestnuts' from Chicago) to sublime (on 'The Hanukah-xmas March of Truth for 12 Days of Jingling Bells With Spirits' from the Chicago band, there is a beautiful solo piano section from Baker which then gets poked at by Berman's cornet) and often in the same track, like the 28 minute rendition of 'The Hanukah-xmas March of Truth for 12 Days of Jingling Bells With Spirits' from NYC, where the regal melody is lightly shadowed by Cline's wavering electric guitar for a little bit before it takes everything quickly Downtown.
Of course my question is what's next? The recordings so far have drawn from touring, live situations where the audience and band have made for ever changing experiences. However, this year because of the pandemic there was no tour (though there was a live streamed concert). One may be tempted to think, following current patterns, Vol 5 could very well be a Mars Williams solo Ayler Xmas release. Who knows!
A few notes: the vinyl version is built around contrast - it contains contains only tracks 3 & 6, which is the same medley from the Chicago and NYC groups respectively. The vinyl version does come with a download of everything. The NYC recording is also dedicated to Eric Stern, a friend and contributor to the blog, at whose concert series the NYC recording was made.
Paul on Monday, December 21, 2020
Share

I was pleasantly surprised with how the playing and arrangements were at such a high level from beginning until end. Each volume has been a welcome event but this might be the best yet.

I love this stuff. So true to the spirit of Albert Ayler. And, overall, just great playing! I've bought all their volumes including this one.