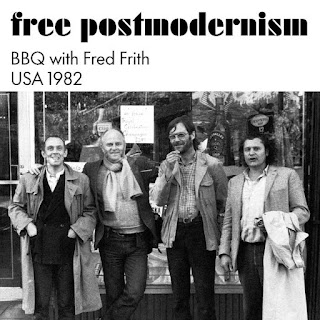 I just about fell out of my chair when I saw this recording pop up in my Bandcamp feed this Fall, what an unexpected surprise! For the uninitiated, this is an archival recording made on the sole US tour of the Bergisch-Brandenburgisches Quartett (BBQ), a divinely pungent concoction stemming from the enlightened minds of Rüdiger Carl, Hans Reichel, Ernst-Ludwig Petrowsky, and Sven-Åke Johansson. These gentlemen had worked together in various groups previously, most notably in bands of the Globe Unity Orchestra microverse, but the BBQ configuration first performed in Rostock in 1980. At that time Petrowsky lived in East Berlin and Johansson in West Berlin while Carl and Reichel lived in Wuppertal (Berlin is in the county of Brandenburg and Wuppertal in the region of Bergisch Land, hence the name of the group). In 1982 the band embarked on an East Coast tour of the US which required overcoming some fairly non-trivial obstacles. Firstly, Petrowsky had to obtain a West German passport, which he was able to do under the guise of going on tour there. Secondly, no one in the group had a credit card, so a friend in New York had to rent them a car for the tour. Fred Frith (who lives in New York and appears on the back half of this recording) helped arrange some of the dates along with various other unnamed (but never unappreciated, men and women of the cloth so to speak) East Coast organizers.

This release documents a stop in the city of Allentown, Pennsylvania with the aforementioned Fred Frith joining in on the back half of the set. The first piece is the longest and begins heatedly, the frenzied saxs running amok against a throttling rhythm. Reichel's thin and wiry guitar is sympathetic and controlled. It feels both a part of, and separate from the rest of the maelstrom, like an elegant gold leaf design framing a barn fire. The intensity wanes, the sax maelstrom softens to chatter, the rhythms turn to understated pattering and bowed metal, the gold leaf dissolves to a confetti of jangling strums, plucked harmonics, and behind the bridge tapping. Reichel unfurls bewildering plumes of delicate, hinted melodies. It's a shimmering undercurrent for the lamentive reeds and disintegrating percussion. The accordion introduces itself meekly as accompaniment for Sven-Åke who pontificates his screeds to a grateful and sympathetic audience before the piece dissolves into fragmented ambience. The second improvisation spits, and hiccups to life via Reichel and Johansson's jerky and spastic interplay. Around the midpoint their bizarre vehicle becomes mired in the viscous soup of hallucinatory Germanic free folk poured on by Carl and Petrowsky.

The third piece begins in a blast of wobbly Reichelian guitar before segueing once again into Sven-Åke's theatrical crooning and exploratory avant-polka. A stray lick from Moon River and the simmering grog boils over in a flurry of explosive percussion and Petrowsky's spit and splinters clarinet expressions. The cheerful laughter and scattered applause of the crowd during the fourth track hint at some unheard comedic gestures during the subdued beginnings. Reichel alternates rapidly slashed chords with a muted, lurching arpeggio and double bridge guitar techniques whilst the percussion and reeds slowly build up intensity. It's hard to pinpoint where the wave finally crests, but once it does the latter half of the track is a proper blow out lead by Carl and Petrowsky who put on a bit of the old shriek-and-wail for the delight of an appreciative audience.

From the fifth track onward the group is joined by Mr. Frith on violin, guitar, and electronics. Really great stuff. There is a wonderful joviality imparted to the music (which I'd kind of hoped for/expected given the parties involved) that manifests in both a spirited performance and a heavy re-stirring of the creative pot. Bouncing horns shuffle amongst a din of accordion debris, irregularly strummed guitar, and Frith's snaking Michel Sampson inflected bow work. At 7 minutes Reichel strums out a jarring, 4/4 riff that stands in stark contrast to everything else that's happening. He sustains it just long enough to remain peripheral then promptly lets it fall apart. The final piece initially pairs an accordion/guitar rendered-faux-tango with Sven-Åke's earnest stream-of-consciousness dialogue when the piece abruptly explodes in ecstatic communal chaos. The come down is a slow aftershower of flute, whistles, bird calls, and woozy guitar shimmer.

Free Postmodernism, BBQ with Fred Frith - USA 1982 is a rich sülze of performance art, mutant guitar, volksmusik, and free jazz from a group whose sound is about as unique as they come. This is only the 2nd official BBQ release after their eponymous debut on Amiga back in 1984, though there are a couple of live dates floating around on the web for those who are interested. And if this single set of unearthed, classic European free jazz isn't enough to get you excited, Sven-Åke hinted at more BBQ archival releases to come!