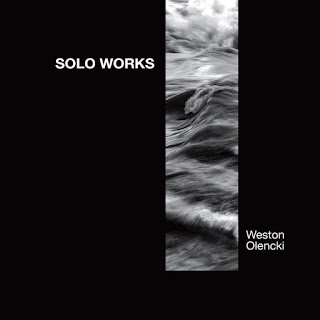 Weston Olencki violates the identities of trumpet, trombone, and euphonium, transforming them into harsh, pulsing noise machines, on Solo Works. Olencki achieves this through preparations, amplification, and introducing objects like unconventional mutes. But also through loud, long durations emphasizing textural strokes created by pressure changes and harmonic synthesis. This record is abrasive. Not so much for the noise itself but for the interfaces between noise and silence, which shellshock the ear. These imposing, visceral, textural, confrontational sonic swaths are the closest music might come to standing in front of a big, dark Rothko.

“seven stones (parallax)” begins with a breath. And then jolts with a wall of noise. A bass trumpet with deconstructed and augmented parts blown into a snare drum head sounds like a television test tone with static white noise like bees swarming and a distant jackhammer. It alternates with other sonic fields of corporeal, electric deep bass throbbings and absolute silences. The metal clamp lamp shade mute on “for trumpet” produces a similar static noise, with scraping, sucking, and squealing, and also employs the jarring juxtaposition of silence and high-volume sound. It sounds electronic, like feedback and distorted signals, but the intermittent close-mic’d breath reminds the ear of the acoustic, human source. The sidelong “capacity” offers a reprieve from the assault, with recognizable movement and farty timbres that retain the comic persona of the trombone, amplified here. Though this quickly moves to sustained durations with textural movement emphasizing varied pressures, with some resonant purrs and big foghorn blows. And “bisected mass” is an extended duration of breathy, airy tones shifting to screeching noise drone for euphonium with reeds and unconventional mutes. Like much of the music that preceded it, it begins to sound inhuman, electronic, if not for the short gasps for circular breathing.

With Solo Works, Olencki places himself in the lineages of pioneering horn players Nate Wooley, Greg Kelley, and George Lewis and their noisiest works. The unsettling, confrontational use of silence and noise recalls Polly Bradfield’s Solo Violin Improvisations, though this is much more noise than silence. This is one of the most challenging listens I’ve come across in some time. But the richly textural subversion of instrumental identities through novel preparations and simple but bold compositions keeps me coming back.

Solo Works is available digitally and on CD.