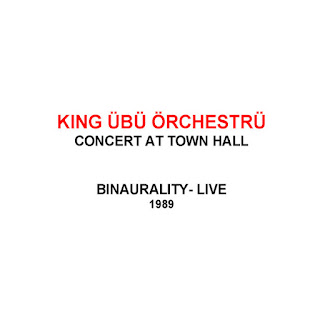 "The painter facing the white canvas

This past June FMP founder Jost Gebers and our friends at Destination:OUT! issued a digital album of an unreleased 1989 live set from the King Übü Örchestrü, the excellent large collective organized by the late Wolfgang Fuchs. Named after Alfred Jarry's universally relevant and timeless play Ubu Roi (the link is to Geoff Dunbar's short 1978 animation; recordings of staged performances from a variety of countries and time periods abound on YouTube, be sure to check out Jean-Christophe Averty's 1965 version as well), the Örchestrü is a personal favorite, in particular their 1993 release Binaurality, a classic of the FMP catalogue. The cast of characters and contributors for this “big band” is long (I have a list going below, if I’ve missed anyone let us know in the comments and we’ll get them added) and transient, with Fuchs, Paul Lytton, Radu Malfatti, and Philip Wachsmann being the only “permanent” members in that they’ve appeared on all of the recordings.

The Örchestrü, or just Übü as it was referred to among the collective, coalesced in rural Germany sometime in the early 1980s from several different working groups. Their focus on sonic texture rather than intensity (my words not theirs) was something that evolved organically as a function of the members involved. Paul Lytton said that when a new musician played with the group it quickly became apparent whether they were going to work out in the overall chemistry or not, as the groups propensity for maintaining persistent and hypersensitive group interplay was off-putting for some looking for a vehicle with the possibility of more individual expression. Fuchs ultimately took up the responsibility of being the central organizer and artistic director of the group. When asked about the difficulty of organizing such a large multinational ensemble in the days before the internet, Lytton had a funny, simple answer, "You had to be a man of your word, and when you said you were going to be somewhere you had better show up."

The group's first album Music Is Music Is… was put out on the FMP sub-label Uhlklang back in 1984 and was followed by Binaurality in 1994 and Trigger Zone in 2001, both on FMP. The sleeves for all three of these releases feature the distinctive paintings of German artist Max Neumann. Their (previously) final album, The Concert Live at Total Music Meeting 2003 , was released on a/l/l in 2004 and documents a performance at the Total Music Meeting the year prior where the band was joined on stage by actor/speaker Boris Aljinovic and vocalists Phil Minton and Irene Barr-Greiner who were asked to work with Jarry's texts for their contributions, independently of each other. In addition to the album being reviewed, there are a couple of great recordings of the group at the Münchner Big Band Meeting in 1992 and at Nickelsdorf in 1995 floating around that help fill out the time period around Binaurality.

The Concert at Town Hall/Binaurality Live - 1989 release (which per Mr. Lytton isn't necessarily directly linked to the 1993 album it's named after) is divided into three segments whose combined duration is just a little over an hour and a half. The Örchestrü's sound on this release features fewer electronic parts than their later albums, but is no less textural or dynamic. The shifts in intensity are interesting to hear unfold, as there isn't any obvious evidence of anyone going off on their own and the rest following (though I will say on this release and others the group is very sensitive to Lytton’s percussion). Rather, the group slowly feeds off each other, reacting to what they hear and supplying complementary sounds and textures within the evolving, dynamic improvisations. The framework is always minimalist, nothing is ever added that isn't necessary. As noted elsewhere, this is in contrast to other large ensembles like their contemporaries in the Globe Unity and ICP Orchestras (the former sharing members with the Örchestrü) and American groups like Sun Ra, where the free sections are often overwhelmed with passionate group free play (I'm not by any means suggesting this is a bad thing, on the contrary, Übü's is simply a different approach). It's like sonic pointillism with each artist representing a different timbral color, the results being unquestionably archetypical of the group (and really to the specific configuration of musicians playing).

It's a welcome release and a great addition to the D:O!/FMP Bandcamp catalogue. The album provides an intriguing snapshot of the group relatively early in their sonic evolution and is the only available recording with this exact lineup. The King Übü Örchestrü features conspicuously in the FMP catalogue as a very unique group among very unique groups, and our sincere thanks go to D:O! for making this available.

(All documented members | ✓- on this release):