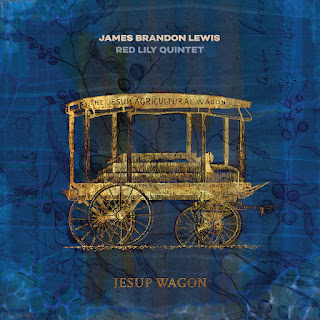 One of my few memories from South Elementary School in Jonesboro, Arkansas, was watching a film about Dr. George Washington Carver. Carver was the genuine Renaissance man. Born the legal property of another man, he was four years old (or so) when the 13th Amendment abolished slavery in the United States. He studied music and art, and then agricultural engineering. He is most famous for advancing the use of peanuts as a crop to restore exhausted soil. Here is a man.

He was a frequent subject of heroic paintings. It is doubtful, however, that anyone can ever produce a more beautiful tribute than James Brandon Lewis has in Jesup Wagon, his recording for the new label TAO forms. The latter is out of the gate with such artists as The Ivo Perelman Trio and Matthew Shipp.

Lewis composed the music and plays tenor saxophone. Most of the compositions are centered on dialogues between his sax and Kirk Knuffke on cornet. William Parker, in my opinion one of America’s greatest living jazz composers, plays bass on two tracks. Chris Hoffman is on cello. Chad Taylor plays drums and Mbira on one track, a traditional instrument from Zimbabwe that looks like a set of table knives packed for travel and sounds like a miniature metal drum.

The jazz is simply exquisite. Each theme is richly romantic and follows traditional form: the theme stated and used as portal to new realms of design space. Lewis’s horn reminds me of David Murray in albums such as Ming and The Hill. If you like Murray, you’ll like this.

Listening to “Fallen Flowers,” a call and response theme, did that avant garde thing to me, that feeling I had found it. There is a moment when a phrase that you expect will be played by a horn is instead articulated by the cello. That is a mark of genius in leader and composer.

If the former composition demonstrates Lewis’s surgical skills in the tissue of the human heart, the next one, “Experiment Station,” presents the raw power of his horn. Here is the hard boil of edgy jazz. The next cut, “Seer,” feels more in the mood of a church service. The mbira is a constant reminder of where we all come from. The last cut, “Chemurgy,” a term for the industrial use of raw materials, is a metaphor for jazz itself with an explicit Ornette Coleman vibe.

Did I mention that I liked this album? Don’t miss it.

Fine review of a great album. William Parker plays gimbri on two tracks and bass on the rest.

Thanks, Richard. I missed the gimbri in the notes I had.