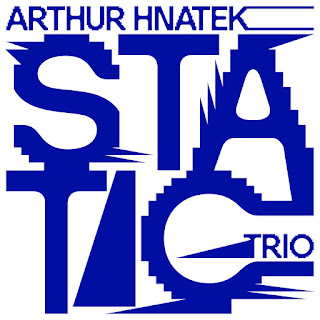 Liner notes can be an asset and they are with this release. However, I always like to read them afterwards to see how my listening compares and contrasts to the notes. It is an effective way for me to stay engaged in a world that seems more needy of interaction yet hesitant in many ways. It is important to listen to the music first, without any prep. Having written that, here is a little objective info on Static by Arthur Hnatek Trio. It is the Zurich based musician is first trio record: joined by bandmates Fabien Iannone on bass and Francesco Geminiani on tenor sax.

All players are new to me but the label, Whirlwind is familiar to me for many other quality releases.

I have been listening to and seeking out a fair amount of European music lately, letting my ears expand to hear the Jazz Diaspora, if you will. What I have learned is that the human element has always been the common denominator in whatever you call this music, it is the fuse that drives the creative arc from long ago to the now.

“Monotonous” opens the album with a mélange of sound and tempo but also establishes the trio’s approach as distinctions between instruments and time blur and finally dissolve.

Iannone’s percussive bass opens the second track, “27”, and Hnatek joins in with some grooving tintinnabulation that lures Gemiani into to uncurl and unfurl some reptilian lines from his horn. I like a little bit of electronic scuzz thrown into the mix, too.

Geminiani contributed “Brew” and here’s where lines really blur. The horn and drums play and ricochet off each other as Hnatek layers the beats and then Geminiani joins in to scale to heights languidly. It is a nice contrast and a hallmark of the effort. Then at four minutes or so Iannone asserts himself with the burning brogue of the bass that morphs into an arcane rhythm. Finally, something approaching a Disco beat shows up as the trio flashes it chops illustrating humanity in rapport.

“MIDI San Frontiers” Midi without borders, ha! That is what two months of Duolingo got me… But this is ethereal balance b/w the bass and midi and horn and muted drums of Hnatek It is a moody, beautiful piece. Geminiani’s horn approximates a trumpet’s clarion call at times while a shift near the end emphasizes by contrast.

The album’s subtle diversity shines through on “Nine B” with more of a world aesthetic as they make use of the studio to deepen their sound as Iannone’s bass and Hnatek’s drums lock in tight. It is my personal favorite.

The tune “Static” carves out its own space with found objects as much niche as a traditional kit. The hum of analogue technology humanizes the music, the pace invites you in and the coy but dynamic shifts and tones keep you and entertain you.

The last song, “The End,” is an echo, a coda, a fare thee well tease that left me looking forward to more music and creativity from this trio and individual talents alike.

It took a few listens for me to enjoy this recording. It is not inaccessible, but the first few passes left me with impressions of monotony and echoes of Christian Lillinger or Mark Guiliana with more of a DIY aesthetic. But something kept tugging at my mind and ears; there is a deeper sense of humanity at work and play here between the artists, the instruments, and the technology. Static is a good title, there is that sound of static, and a sense of stasis, but also, underneath there is a vibrant creativity unfolding in some places one never thought to look or listen.