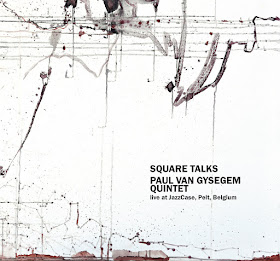 Paul Van Gysegem will turn 86 this year but he hasn’t been prolific, in a way remaining out of sight even for people, like me, who obsessively hunt older and more recent unknown treasures. Listening to Square Talks I must admit that is a pity. This live recording from September 2019 consists of Gysegem himself on double bass, Cel Overberghe on tenor and soprano sax, Patrick De Groote on trumpet and flugelhorn, Erik Vermeulen on the piano and Marek Patrman on percussion and trumpet on one track.

The five musicians declare right from the beginning their will to communicate and interact as a unity. Beginning with the first track, Haaks, they intend to make clear their collective approach. All of them are not newcomers in this risky game called improvisation. They know each for quite a while (decades actually) and they have played together in various formations and groupings.

As improvisers they try to stay focused in their collective approach: you will not hear solos or someone standing out as an individual. Instead they form small groupings within the quintet’s sound, leaving also silence and sparse noise making to lead the way. I loved the way they balance between bold aggressive audio choices from their acoustic instruments and at the same time providing lyrical statements. This needs experience and spending many-many hours (not just playing but also reflecting and discussing on it) trying to succeed.

But what is success in any case? In this quintet’s sound I think it’s the use of different ingredients that have dominated jazz based musics for the past five decades –but making them feel fresh anew. They improvise with a lyrical sense, using a collective language. The music (clocking in fifty fruitful minutes) is clearly hard to categorize, bringing me back to the initial thought (easy to describe it, really difficult to achieve) about balance. And an egalitarian way of playing.

For many of us who still love jazz but find it difficult to describe (and differentiate maybe) between what seems fresh and exhilarating while using some older codes and what is not, Square Talks is one of those albums that belong to the former category. What a nice surprise it was, a cd that I found solace in it. El Negocito is slowly -out of sight sometimes- building a great catalogue for those who want to listen outside of the hip sounds.