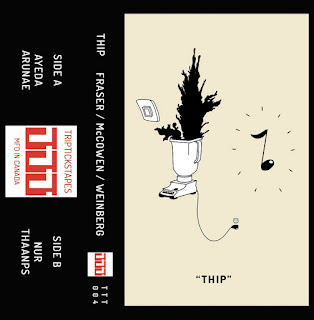 Fraser and Weinberg are a familiar duo that have established themselves as an apogee of the noisier spheres in improvised music, releasing Drolleries - with percussionist Jason Nazary and guitarist Andrew Smiley - and Foment - with drummer Tyler Damon - in 2019 and Grist with percussionist Weasel Walter in 2020. Thip is their first release with McCowen whose own gravitations towards noise can be witnessed in Two Energy Cops At 3 AM (for Bb) and parts of Live @ ISSUE Project Room (for contra) from 2020. Recorded in 2019 at ISSUE Project Room, Thip captures the cathedral reverb of the space and leverages it as musical material to become a defining characteristic of the performance.

The trio whines, screeches, and squeals, sometimes such a pure noise to be indistinguishable from each other, but with enough glimpses of the metallic chirp and chime of saxophone, the nasal wood of clarinet, and the coarse scratch of rosined strings to never totally lose the sources. Soundings are more often attacks alone in space - though with exceptions in each piece, the falling/rewinding lines of “Ayeda,” the tropical bird calls of “Arunae,” the percussive repetition of “Nur” - with relative sparsity and alien tonalities lending an unfamiliar and volatile viscosity to the movement that recalls the disorienting holy minimalism of Arvo Pärt traced through Maneri / Maneri / Phillips. Communication is contrapuntal, more often sounding in unoccupied spaces than together to weave its snaking lines. But the reverb and echo of the room eliminates any silence, extends the sounds, and chains the discrete noises to make a continuous pulse. It’s hard to pinpoint, but there’s an intonation in the instruments that suggests they acknowledge and incorporate the reverberations into the group, maintaining a density and dynamics in such a range as to always allow it and to never drown it out, seemingly giving as much play time to their echoes as to themselves.

There’s a bonus track of the trio with trumpeter Joe Moffett recorded in a park, with air planes, birds, and a whirring silence from portable equipment recording outdoors, but no echo, encouraging some sustained soundings and energetic interplay not heard as often in the ISSUE performance.

Thip is available digitally and on cassette.