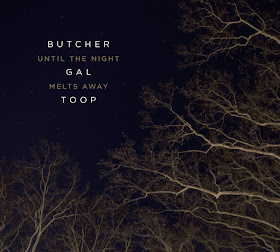 
Until The Night Melts Away documents the musical meeting of three exceptional British free-improvisers - sax player John Butcher, vocalist and electronics player Sharon Gal and David Toop who plays here on lap steel guitar, flutes, bass recorder, African chordophone, and various objects. Gal has performed before with Toop as a duo, and Toop has written liner notes to a few of Butcher's releases, however, as far as performances go, this date from London’s Café Oto in April 2019 was the first, and so far, only meeting of all these of these interdisciplinary and idiosyncratic sonic explorers, who are  interested in feedback and unusual acoustics (Butcher), embodiment, the psychology of sound and the relationship between people, sound and space (Gal), and crossing the boundaries of sound, listening, music and materials (Toop).

Until The Night Melts Away is also the first release of the newly-founded Shrike Records. The 36-minute recording begins with Gal’s quiet sound of bells, extended breathing techniques of Butcher, and distant and sustained lap steel guitar lines, and soon these sparse sounds feel like melting into each’s other, sketching an imaginary, leisured and breezy scenery. Slowly, Butcher, Gal and Toop expand this delicate and suggestive sonic envelope in unpredictable ways and with imaginative sounds - subtle electronics and feedbacks, bubbling breaths, exotic flutes and resonating percussive objects, but maintain the collective trio sound. Gal acts like she was possessed by an enigmatic shamanic spell with her wordless vocalizations, processed voice and assorted bells, while Butcher’s brief and urgent blows on the sax and Toop’s noisy and distorted sounds build the tension.

But even in the most abstract and almost silent segments, Butcher, Gal and Toop operated in mysterious and poetic ways, always attentive to every gesture but letting the sounds and their fragile dynamics lead them all. The interplay becomes more intense and fierce only in the last minutes of this improvisation when Gal’s processed shouts collide with the tortured breaths of Butcher and the distorted lap steel guitar sounds of Toop. But, surprisingly, Gal opted to conclude this arresting improvisation with an emotional, caressing touch, beautifully answered by Butcher and Toop.