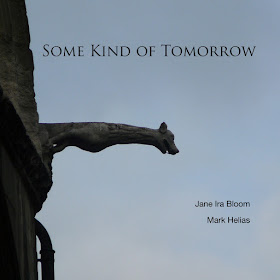 So many bass+ duets going on! I’m not sure if it’s just the shadow of 2020 and the logistical necessities created by the big P, or if it’s always been this way and I haven’t noticed. I don’t have a judgement about this, just that it seems worth remarking upon. Quite a lot of those feature bass and sax , and one of them, reviewed recently by Stephen Griffith, featured our man, Mark Helias, in duet with Tim Berne .

The present release, Some Kind of Tomorrow, is an all improvised conspiracy between Helias and soprano saxophonist Jane Ira Bloom. It has been something of a shock to my sensibilities. So much so that I’ve been holding back on the review. Listening again and again (more than usually). Even asking colleagues who are in the know what they might think. I know what I’m feeling, but haven’t trusted the words that have been coming to mind. Now, I shall.

Jane Ira Bloom has been in my world since Art and Aviation came out in 1992, and the things that stuck me then strike me still. She is a unique quantity. Her playing has an earnestness and space that stood out against the irony and denseness that obsessed me at the time. Ostensibly she plays “straight ahead” with a post bop language base. That’s the skeleton. But she’s not obviously a part of any particular school or movement. She uses a brush of electronic effects that are all the more effective (and affective) for being sparely deployed. Her harmony and sensibility brings to mind art song and Satie. Much of what she does seems in conversation with other art. Sometimes it’s obvious— interpreting Emily Dickinson, for example— other times it’s just me, for whatever reason, understanding her music in terms of theater or dance.

Thus it is with the current release. The conversations between Bloom and Helias, long time friends, feel immediately to me like a series of staged dialogues. Scenes from a … There are characters, conflicts, disappointments, jokes, deep understanding, monologues, comfort, compassion, walks through the city, being at home and sharing their day. I can see actors “saying” this music, or maybe dancers dancing it. It’s as if they were an improv duo, but instead of comedy, it was legit drama. Honestly, as I listen now, I can see the animated short film where the two shapes are making their plans, doing their work, not saying their feelings, until they do. There’s a story in every one of these pieces for me. There is a stern whimsy, a blues like Raymond Carver’s.

I think I’m still trying to sort it out for myself. It’s entirely possible that I’m thinking about this too much, but I’m finding this hypnotic. Returning to it again and again. It’s not whipping me into a frenzy, the way so much of my fave music, but it’s raising my disquiet and then bedding it down, like so many of my favorite stories or poems.

Cool that you took the risk. I wanna hear that record for sure.