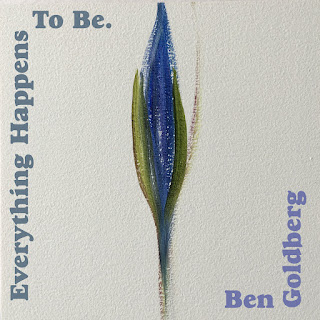 Despite the odds, a surprising number of musicians have been able to remain relatively prolific during the COVID pandemic. Whether finding fortuitous opportunities to get into the studio or performing in online concerts, the spirit of adventurous jazz certainly survived amidst the formidable obstacles placed in its way. Clarinetist Ben Goldberg is one of those artists whose seemingly limitless creativity was not to be denied during this challenging time. Since 2020 he has released several projects, perhaps the most ambitious (and appropriate) of which is his Plague Diary (BAG Production Records), an astonishing sequence of recordings Goldberg produced almost daily beginning in March 2020 and extending all the way through March 2021: over 200 pieces of music in all, many utilizing keyboards instead of his horn, but each bearing Goldberg’s impeccable commitment to musical precision and integrity. A good number of the pieces are dedicated to other musicians: some are contemporary colleagues of Goldberg, like Nels Cline or Geof Bradfield or Myra Melford; others are past jazz heroes, like John Lewis, Steve Lacy or Charlie Parker; and in Goldberg’s inimitable fashion, others are a bit more out of left field, like Cicely Tyson, Ruth Bader Ginsburg or Sheldon Brown. What these diverse pieces have in common is that they are rooted Goldberg’s endless generosity: a willingness to acknowledge his debts and to look for ways to integrate others’ contributions, musical or otherwise, into his own output.

And this is of course what makes Goldberg such an important presence in today’s creative jazz. His ability to locate his own work within the ongoing evolution of jazz and improvised music, and to find colleagues past and present who are also part of that development, is crucial to the lasting power of his artistry. Nowhere is this more evident than Everything Happens to Be, his latest release, featuring a star-studded lineup of musicians who have worked with Goldberg in recent years. The power-trio of guitarist Mary Halvorson, drummer Tomas Fujiwara and bassist Michael Formanek are here, and they’re joined by saxophonist Ellery Eskelin, who makes up the fifth member of the quintet. While Goldberg has done work with each of the four in different contexts, this is his first opportunity to bring all of them together on the same project. And it’s Goldberg’s remarkable sensitivity in knowing the distinctive strengths and dispositions of each musician that allows him to create an ensemble that works so well together.

While there are plenty of moments of collective conversation here, at the heart of the album are Goldberg’s compositions. Typically folksy in character, they have a winsome charm that will win you over on the first hearing, but a deeper appreciation will take place on subsequent listens, as one comes to perceive the logic behind Goldberg’s songcraft. Strong melodies always prevail, but there is always enough freedom to allow each member of the quintet to make their distinctive contribution. It might be Eskelin’s earthy tone on “Chorale Type,” almost sounding at times like he’s playing a baritone sax rather than a tenor, so deep does he go into the lower register; or maybe it’s Halvorson’s otherworldly licks on “21,” adding just the right degree of oddity to offset the tune’s jaunty playfulness; or perhaps it’s Goldberg’s own lyrical flights on the Monk-like “To-ron-to,” a fitting reminder of his prodigious talent as a clarinetist. Formanek’s nimble fluidity also finds an outlet, as his brilliant support on the album’s title track demonstrates, and Fujiwara gets his own moment to stretch out on the appropriately titled, prog rock-flavored “Tomas Plays the Drums.” Goldberg knows each of these musicians so well that it seems almost effortless for him to find ways of synthesizing their individual voices into the collective product.

In the end, it’s Goldberg’s ability to draw together so many different strands of the jazz tradition that most stands out here. The distance between Louis Armstrong and Ornette Coleman is closed dramatically on a piece like “Cold Weather,” which moves somehow from New Orleans swing to untethered freedom, all in the span of a few minutes. Goldberg’s cross-stylistic facility lends a certain timelessness to this music; after a while one simply stops trying to analyze it in favor of simply savoring its beauty. In this light, the brief closing coda, “Abide With Me,” serves as a reverent reminder that at the heart of Goldberg’s music lies the unmistakable power of melody. That he has found four colleagues here who fundamentally share that conviction renders this release the perfect vehicle for his creative efforts.