Today we continue our series of reviews celebrating Clean Feed's 20th anniversary, with more to come in the near future. Be sure to check out the first installment here. 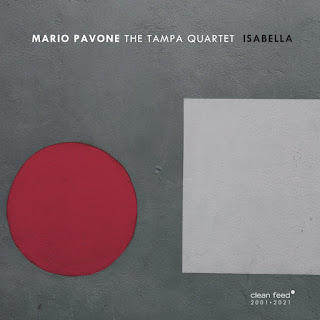 Mario Pavone had no intention of going quietly. He battled cancer for almost two decades. As the end approached, he recorded two albums Blue Vertical and Isabella. The latter was dedicated to his granddaughter, who passed away last year when she was only 23. It features his son, Michael, on guitar; Mike DiRubbo on alto saxophone, and Michael Sarin on drums. That’s one trio of live mikes!

The music is impressionistic, with a bit of melancholy but without sorrow. The most conspicuous feature is the tandem solo: two instruments playing the same melody closely enough for each pair of notes to blend together. Most often and most impressively, guitar and horn; sometimes, bass and horn…

This one is worth a careful listen. Pavone’s double bass is persistently brilliant. You never forget who is laying down the logic. DiRubbo and Sarin lay down notes like pieces on a Go board. Michael Pavone has that enviable talent that allows him to make the guitar seem like three different instruments. Mario Pavone was a great loss. He has left behind a lot of the riches he produced over the years. This wealth will not soon be exhausted. 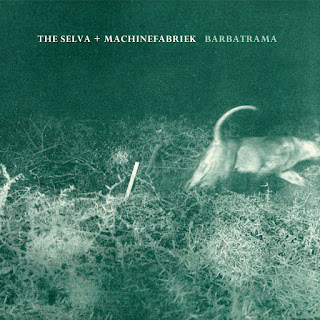 Last summer at Jazz 2020 - the pandemic edition of Jazz em Agosto - I was baptized in the sonic waters of The Selva. The trio of cellist Ricardo Jacinto, drummer Nuno Morão, and bassist Gonçalo Almeida bathed my senses with acoustic/electric enlightenment. Afterwards, I went back to the two recordings from the trio, 2017's self titled debut, and 2019's Canicula Rosa (both also on Clean Feed). On the first, they were mainly acoustic, generating both melodic and textural sounds from the wood and steel in their hands. The second recording introduced more electronic enhancements and manipulation of the acoustics, with the acoustic still being first and foremost. Now, here we are with 2021's Barbatrama, and the equilibrium is shifting, titling further in the direction of electronics with Rutger Zuydervelt, a/k/a Machinefabriek, providing electronics and post-production work. Undeniably the sonority of the acoustic instruments - the low end of Almeida's bass, the arcing tones of Jacinto's cello, and the fractured pulse of Morão percussion work still underpin everything, but there an digital edge to the sound, and overt electronic effects that extend the group's sonic and emotional range.
One may not even hear the electronics at first, the opening 'barbatrama' is a quick intro that brings us to 'ramatarba', which takes on a threatening sheen as the strings blur and crackle with electricity. Track three, 'babarmatra," descends like a flock of twisted seagulls onto a meshwork of thick bass tones. Other tracks like 'tramabarba' build energy from short repetitive melodic phrases that eventual decay, while the eight and half minute centerpiece 'mabartrama' begins with a classical sounding series of phrases played defiantly over abstracted percussion and growing electrical interference. The musicians come closer together in the middle of the piece, their sound flows like dark river through the aural jungle, with new adventure around every bend. The Selva is an exciting trio, extending their concept without loosing their vision. 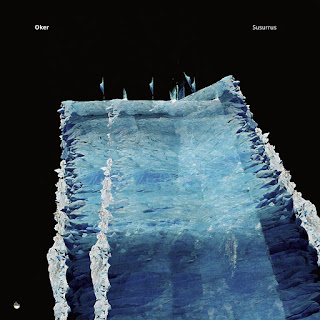 On their second album Susurrus the Oslo quartet of Adrian Fiskum Myhr, Jan Martin Gismervik, Torstein Lavik Larsen and Fredrik Rasten deliver just that, and then some. Using extended techniques and all-acoustic instrumentation the group sculpts unexpected and mysterious pieces that are built on timbre and mood rather than melody. Despite that descriptor's possible allusions, the album is an extremely pleasant and intriguing listening experience. To my ears their sound has more in common with chamber music and/or EAI than jazz. I really enjoyed their first album Husene våre er museer (2018), so I was excited to see this one released and wasted no time in procuring a copy. Each individual contributes a composition, the first two pieces are subtle and ambient, finding the group luxuriating in sonic decay and expertly stacking sounds. The third piece starts small as well but then unexpectedly builds into something resembling a groove, while the fourth is a lumbering pseudo-chamber piece whose tension pulls the barn doors closed. An outstanding new release, highly recommended. 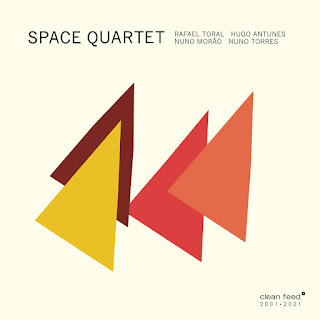 By Lee Rice Epstein
On the second album with this lineup, Rafael Toral’s Space Quartet again makes the case for space, not outer but between. In other words, as electro-acoustic instrumentalist Toral has explored for years, the space inside Space Quartet’s often transcendent playing is amplified by its silence. Directions marks this lineup’s second recording. Double bassist Hugo Antunes and drummer Nuno Morão are a fantastic free rhythm section, and saxophonist Nuno Torres rounds out the group. Torres brings innovative phrasing and a playful sense of collaboration to the quartet’s collective compositions. The title track, “Directions,” hints at a possible Miles Davis influence, but Toral, Torres, Morão, and Antunes seem less interested in direct homage. Instead, “Directions” begins the process of churning, bubbling movement that extends throughout the album. Toral’s trade-off with Torres on the centerpiece “Southern Grooves” shades the group with a blue-toned twilight hue. As hinted at by the title “Moonlight through the pines,” Space Quartet excels at a kind of multisensory performance, representing physical space, mental space, and even overlapping, layered spaces filled with rich colors and buzzy momentum. But it’s the very human, emotional center where Space Quartet succeeds, where the messiness of being alive collides with the expressivity of free jazz. 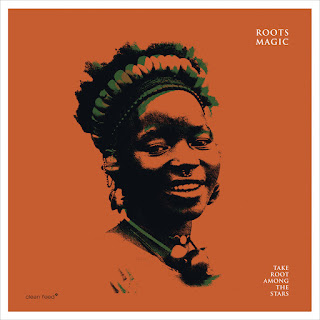 Straight out of Italy via Ellington with a layover in South Africa then channeling into Chicago, Take Root Among the Stars, quoting the words of the great science fiction writer Octavia Butler, here is Roots Magic’s third installment for Clean Feed and about as appropriate a title I have ever encountered. The quartet adds special guests, historical wind player Eugenio Colombo and vibes maestro Francesco Lo Cascio, for the album as they plumb depths and scale heights. The new repertoire includes reworked tunes by Skip James, Kalaparusha Maurice McIntyre, Charles Tyler, and Ornette Coleman plus new works on some of the band’s favorite composers, Charley Patton, Phil Cohran, John Carter, and Sun Ra.

Take Root Amon the Stars has a big sound, as in BIG, forceful with a rumbling crashing groove. “Still Screaming for Charles Tyler” is a standout for me, relentless but soulful with the group making a glorious, fervent, pulsing noise.

Highlights include but are not limited to: “Frankiphone Blues” by Phil Cohran leads off with an especially tasty Afro-Vibe seasoned well by Lo Casio’s vibes. “Mean Black Cat Blues” filters Charley Patton through roughhewn soul of contemporary Chicago musicians like Ken Vandermark with a healthy dose of Ellingtonian “Jungle” to create something original and satisfying. “A Girl Named Rainbow” saunters and parades in true style never afraid to wander off the path because that is what makes returning to the groove even more alluring.

Roots Magic blur the lines between originators and progenitors filling your head with timbres of energy and soul not just finding connections but expanding on them as well. It is a worthy addition to the Clean Feed catalogue. 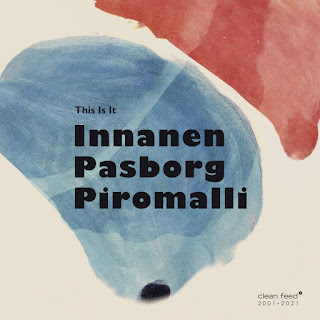 By Paul Acquaro
Oh this is sweet. It's got guilty pleasure written all over it. But actually, why be guilty? What's wrong with a drum, sax, and Hammond organ trio unafraid to lean into the head-bopping groove? The trio is Mikko Innanen on alto, baritone and sopranino saxophones, Cedric Piromalli on Hammond organ, and Stefan Pasborg drums, all musicians who together have a web of collaborations ranging from Han Bennik to Wadada Leo Smith to John Tchicai (and many more) and on This is It, they reflect the tangled web of the jazz influences, from traditional to modern, to gospel inflected, to avant-garde and back again. The opener, 'Mocking Bird' could be a standard played by Lou Donaldson and Dr. Lonnie Smith, but then something else happens - Pasborg introduces a groove and Piromalli dig in with a thick chord driven solo, leading back to the tunes head, but now played with a driving feel, launching Innanen into a rock-tinged solo. Even the drummer gets some in the seven minute opener, as Pasborg scatters the pulse up without losing momentum. The title track begins with a yearning cry from the sax, over the rumble of the drums and soulful chords of the Hammond. What happens next is a guided tour of what the Hammond organ can do led by an excited Innanen, and a calm, consistent Pasborg - we hear the colorful, somewhat edgy tones of the single note runs, church-like open valve exclamations and throaty hallelujahs. 'Manic Zigamen' is a timeless anthem, it could easily be from an early 70s prog-rock group as it is from right now. The organ playing is dense, propulsive, and the sax cuts through with precision. There is more on This is It to luxuriate in as you contemplate - Is it an anomaly among Clean Feed's output, or sign of a big-tent approach to what is current jazz? Actually, who cares, this stuff just makes you feel damn good. 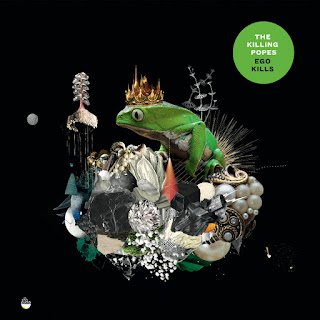 By Paul Acquaro
Berlin based drummer Oliver Steidel has an extensive list of collaborations as well as his own groups like Soko Steidel and Oliwood, which can be generally be considered in the jazz vein. However, with The Killing Popes, Steidel drops the Ego and lets the Id go wild. Their first recording consisted of the Steidle on drums, Frank Möbus on guitar, Phil Donkin on bass, and Dan Nicholls and Kit Downes on keyboards. This time, maybe because of Corona, maybe because it's just what happened, The Killing Popes is the duo of Steidel and Nicholls, but the credits also name Jelena Kuljic on voice and sampler, Phillip Gropper on saxophones, Frank Möbus on guitar, Phil Donkin on bass, Nathalie Sandtorv with voice on one track, and Liv Nicholls with backing vocals. Is it a consolidation of the band or expansion? Seems like maybe both, but what has not changed is the uninhibited cut and paste of styles, sounds, and substance the made up 2019's Ego Pills.
The short opener, 'Disclaimer,' hovers like a UFO over the Devil's Tower for a quick moment, leading to the exemplary 'Bling Bling Frog$', which features slippery, exacting drum work along with fizzles of electronics and composed horn passages. 'Butcher' begins with a rather threatening sample, followed by pointy sax line and prickly guitar work. 'My Life is Not Your Game' is dominated by Kuljic's provocative half-spoken word/half-sung lyrics about abusive power in relationships, underscored with sound-track like music atmospherics. The track 'Hi Five' is an interesting example of the Killing Popes getting into some avant-garde territory through a trance-like beats and synths. There is a lot more to discover in the impulsive seeming work on Ego Kills - the biggest might be that there is actually a lot of structure below the surface.
Paul on Sunday, July 11, 2021
Share